The 2022/23 Bundesliga campaign heads into Matchday 3 this coming weekend and we return with the best weekly Bundesliga betting tips.

Bayern München and Borussia Dortmund, the two major title-contenders, are presently at the top of the league-table being the only teams to win both its opening two fixtures. Borussia M’gladbach, Köln, Union Berlin and Mainz are a couple of points behind after drawing their respective games on Matchday 2.

Werder Bremen, Stuttgart and Leipzig are the other sides that have remained unbeaten through the first two rounds of the new season. Quite surprisingly, Bayer Leverkusen is presently lying at the foot of the table along with Bochum and they are the only two teams to have lost both its opening two matches. 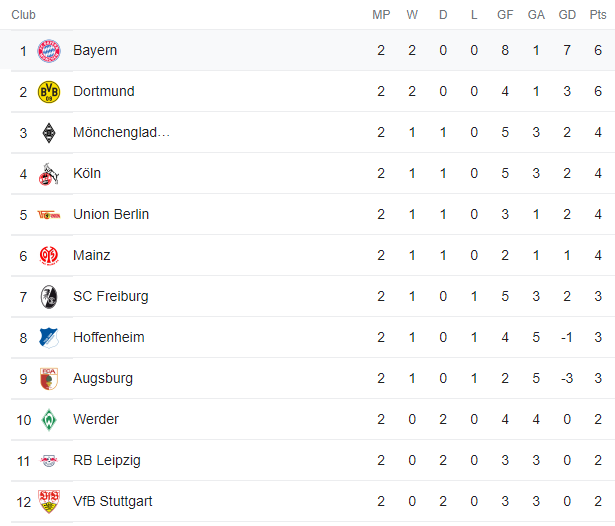 Despite a confident start, M’gladbach will be disappointed to have not taken all the points in the 2-2 draw at home to Schalke. After losing the Berlin derby on the opening weekend, Hertha opened its account with a 1-1 draw against Eintracht Frankfurt.

For this encounter, our Bundesliga betting tips experts would like to suggest taking the 1.92 offer on Over 2.5 & Yes in the Total Goals & Both Teams to Score market. With a fully-fit line-up, Borussia M’gladbach possesses a dangerous front-line which has scored 5 goals in the opening 2 matches but without a clean-sheet. Hertha Berlin is also yet to get a clean-sheet although it has opened its account in both of its league-matches.

The 2.20 line on the home-team to Score in Both Halves looks a good betting-option at an attractive price. M’gladbach averaged almost 2 goals per game last season and scored in both halves of its first home-game of the season. Meanwhile, Hertha had the 2nd worst defensive-record on the road last season conceding over 2 goals per game.

Borussia Dortmund was fortunate to come home with a 1-3 comeback win at Freiburg despite being quite lacklustre for the vast majority of the game. Werder Bremen scored a late equaliser at home against Stuttgart to stay unbeaten on its return to the top-flight.

Our Bundesliga betting tips experts recommend taking the delectable 2.33 price on the home-side in the Match Result & Both Teams to Score market. Dortmund is the hefty favourite to win this contest but it might not be able to stop the opposition from getting a goal. Werder Bremen is unlikely to get anything from this game although it has shown good form in front of goal thus far.

Opting for the 1.95 offer on Over 1.5 Goals for the home-side also looks a smart choice for this fixture. Dortmund had the best scoring-record at home in the Bundesliga last season with an average of over 3 goals per game. Bremen let in 2 goals in each of its first two matches despite playing against teams that ended in the bottom-half in 2021/22.

In spite of having high hopes for the new season, Bayer Leverkusen has started off with successive defeats after going down 1-2 at home to Augsburg. Hoffenheim came from a couple goals behind to pull off a brilliant 3-2 comeback win against Bochum.

Taking the delectable 2.42 offer on the away-side to get the First Goal looks to be the best option for Our Bundesliga betting tips experts. Leverkusen conceded at a rate of nearly 1.5 goals per game at home last season and conceded within the opening 15 minutes in each of the first couple of games. Besides, Hoffenheim has scored its first goal inside the half-hour mark in both of its league-fixtures.

The 2.10 line on Over 1.5 Total Goals in the 1st Half seems to be a shrewd choice for this fixture as well. Bayer Leverkusen has scored 1 goal and conceded 2 during the opening-period of its 2 Bundesliga matches. Meanwhile Hoffenehim has netted 3 times and also allowed the opposition to score 3 times during the 1st half of its 2 league-games.

Bayer Leverkusen 2-2 Hoffenheim at 12.0 on Sportaza.

After winning the Berlin derby on the opening weekend, Union Berlin was held to a goalless-draw at Mainz this past Sunday. Leipzig is yet to pick up its first win of the new season following the 2-2 stalemate at home to Köln on Saturday evening.

According to our Bundesliga betting tips experts, the 2.50 offer on the home-side in the Draw No Bet market seems a wise choice for this fairly evenly-matched clash. Union had the joint 3rd best home-record last season and only tasted 2 league-defeats at Stadion An der Alten Försterei. On the other hand, Leipzig is yet to win away at Union Berlin and came out on the losing side in the previous 2 trips.

The 2.30 price for Under 2.25 Total Goals also presents a good opportunity to bag some winnings. Union Berlin had one of the tightest defensive-units last season and averaged just 1 goal conceded per game. At the same time, Leipzig ended with the best defensive-record on the road with a similar goals-conceded ratio.

Half Time/Full Time: Draw/Draw at 5.33 on Sportaza.

After receiving a hammering on Matchday 1, Eintracht Frankfurt opened its tally for the season with a 1-1 draw on the road to Hertha Berlin. Köln had to battle hard to pick up a point against 10-man Leipzig to maintain its unbeaten start to the new campaign.

For our Bundesliga betting tips experts, the 2.40 offer on Over 1.5 Total Goals on the away-team seems the best betting-pick for this encounter. Eintracht has not kept a clean-sheet and currently owns the worst defensive-record in the division after the opening-night battering. Moreover, Köln has been able to score a couple of goals in both its league-fixtures despite losing its top-scorer from last Bundesliga season.

The 1.95 line on 2nd Half to be the Highest Scoring Half makes a reasonably safe bet for a rather fair price. Eintracht Frankfurt has got just 2 goals in the opening 2 games which have both arrived during the 2nd half. Köln scored 5 times in its first couple of matches of which 4 were scored in the latter period.