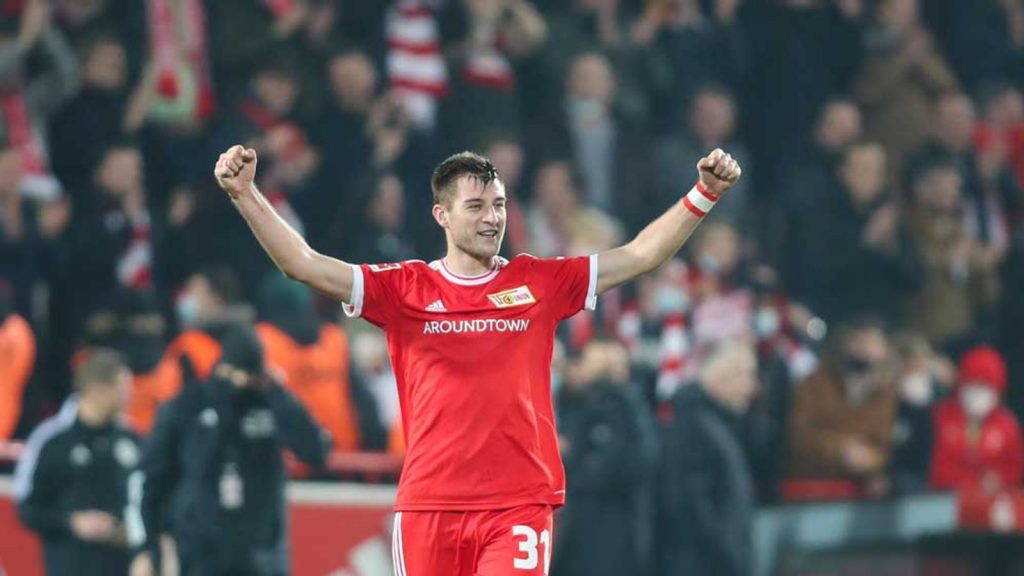 Matchday 31 of th2021/22 Bundesliga campaign will see in-form RB Leipzig welcome FC Union Berlin at Red Bull Arena on Saturday afternoon in a crucial encounter for both the sides. Leipzig has climbed up to 3rd spot in the league-table. Union Berlin has moved back into 6th position once again. Read EagleBet’s top Bundesliga betting predictions and tips below.

What are Leipzig Odds against Union Berlin?

Continuing its exceptional form in this calendar year, Leipzig has taken 23 points from its last 9 fixtures to charge through to the top-4 of the league-table.

While he does have a few injury-problems, Domenico Tedesco should come back to the usual 3-4-1-2 formation after changing his tactics in the last match. Lukas Klostermann is out with Covid so Willi Orban, Mohammed Simakan and Josko Gvardiol will form the 3-man centre-back line-up with Péter Gulácsi in goal. Defensively, Leipzig has been the best team in the Bundesliga over the past couple of months.

Kevin Kampl is ruled out of the squad so Tyler Adams may get the nod to be the midfield partner for Konrad Laimer, who has found some serious form under the new manager. Nordi Mukiele will be the wing-back on the right-flank while Angeliño may be preferred on the left. Dominik Szoboszalai could be attacking-midfielder behind the strike-force of André Silva and Christopher Nkunku.

What are Union Berlin Odds against Leipzig?

What was Union Berlin Performance in the last 5 Bundesliga matches?

After enduring a dreadful slump for about a couple of months, Union Berlin compiled 3 consecutive victories to move back into the top-6 of the Bundesliga table.

Urs Fischer has mostly chosen to set his team in a fairly defence-minded 3-5-2 system for much of the season. There are no injuries in the squad but Timo Baumgartl will be unavailable through suspension so club-captain Christopher Trimmel may have to slide into central-defensive trio alongside Paul Jaeckel and Robin Knoche while goalkeeper Andreas Luthe should also return from the sidelines.

Julian Ryerson will feature as the wing-back on the right with Niko Gießelmann on the left-flank. Rani Khedira has a vital role as the enforcer occupying the defensive-midfield position in front of the backline. Grischa Prömel and Genki Haraguchi are likely to be the two more attack-minded central-midfielders of the side. Taiwo Awoniyi and Sheraldo Becker will operate as a strike-pair up front.

Bundesliga Matchday 31 Betting Tip – Leipzig has 7 wins in the last 9 league-matches and conceded only 2 goals in the last 5 home-games. Union Berlin has lost 4 of the last 5 league-fixtures on the road without scoring a goal.

Bundesliga Matchday 31 Betting Tip – Christopher Nkunku is the standout player for Leipzig with the team also reaching the last-4 of the Europa League. The French forward has 4 goals and 4 assists from his last 4 appearances in all competitions.

At the moment, Leipzig is clearly the best team in the Bundesliga and Union Berlin will probably see its winning-run cut short following this encounter.