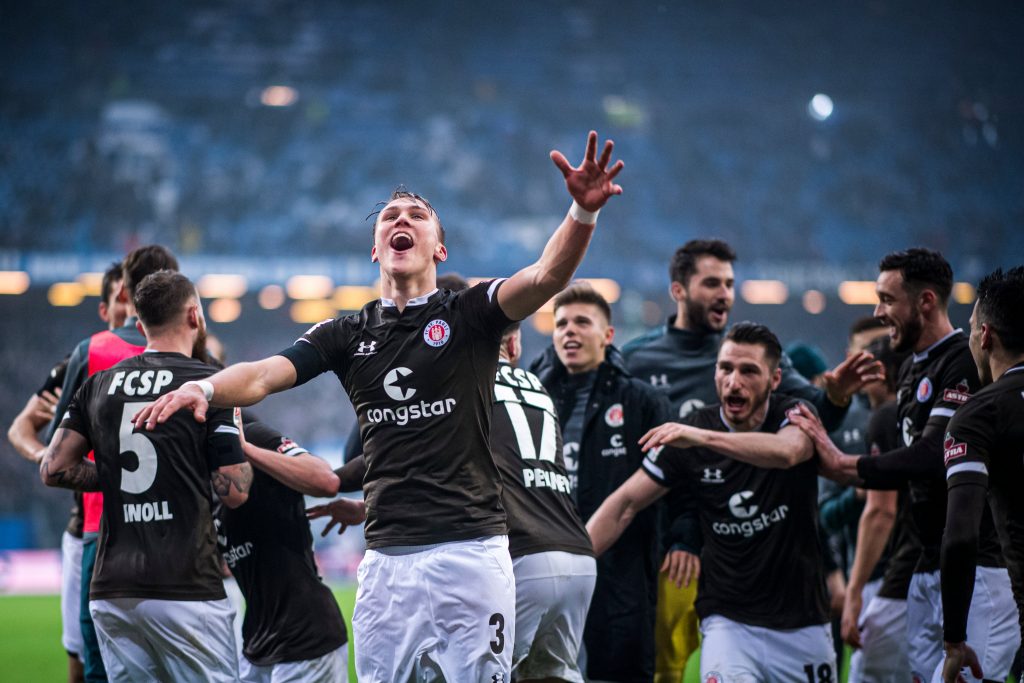 With top-tier football in Europe taking the international-break for the month of November, over one-third of the 2021/22 season of the 2.Bundesliga has flowed under the bridge. It has been a highly intriguing campaign to say the least with twists and turns developing to the tale in every match-week. Our 2. Bundesliga betting tips experts have been following this season closely.

The initial top-contenders, the bookies’ favourites for the title at the start of the season, have seemingly fallen by the wayside. The former Bundesliga stalwarts Schalke, Hamburg and Werder Bremen are all presently outside the top-4 positions and there are some less-glamorous teams deservedly at the forefront of the league-table instead.

With 26 points from the opening 12 fixtures, St. Pauli is currently at the top of the standings and has a game in hand over the other sides in the title-race while Jahn Regensburg is only a point adrift in 2nd position despite playing the extra match. And the multi-faceted title-race is closely knit with Paderborn occupying 3rd spot being only a couple of points behind the leaders and Darmstadt are a point further off in 4th place.

Aiming to make its first appearance at the top-tier in over 10 years, St. Pauli is now the top-favourite in the betting-markets with a 4.50 price to take the 2.Bundesliga crown. After an inconsistent start to the season under Timo Schulz, it is currently on a 6-match unbeaten run that included 5 straight victories.

The team has looked quite fluid up front with chief striker Guido Burgstaller netting 8 teams in the league while their attacking playmaker Daniel-Kofi Kyereh has registered 7 assists. St. Pauli also possesses the best defence having conceded just 11 times so far while keeping 6 clean-sheets.

Having finished the past couple of seasons outside the top-half, Regensburg might be the biggest surprise-package this campaign and odds on it have shortened to 6.00 for the title. They led the league after opening with 4 straight wins but few believed the form would continue for long. And as expected, Regensburg has only 3 wins in the last 9 games yet remains stubborn opponents having lost just 2 matches thus far. Sarpreet Singh, the youngster on-loan from Bayern München, has been their most influential player with 4 goals and 4 assists in the league.

Currently priced at 9.00 by the bookmakers Paderborn is another side to spend time at the top of the 2.Bundesliga after staying undefeated in the first 5 fixtures. However it has not been plain-sailing since with the club taking just 4 wins from the next 8 matches. Yet it still in unbeaten on the road this season including an ongoing 5-match winning-run, although home-form has been woeful with only 2 wins from 7 matches with no clean-sheets till now. Sven Michel leads the scoring-charts in the league with 12 goals and the veteran centre-forward has racked up 4 assists as well.

Having finished in the top-7 positions in the 2.Bundesliga for the past 2 seasons, Darmstadtt is in decent position to earn its promotion back to the top-division. The campaign did not begin well with the club managing to take just 2 wins out of the opening 6 matches. But they have improved in recent weeks by staying unbeaten through the last 5 games with 4 victories. Home-support is crucial for Darmstadt and they currently have a 5-match winning-streak at the modest Merck-Stadion. Phillip Tietz has got 10 goals to his name and his strike-partner has also netted 9 times in the league.
According to the bookies, Schalke is 2nd favourite in title-race for the 2.Bundesliga with a 5.00 offer.

After its unfortunate relegation from the top-tier, Schalke started off with only 1 win from its opening 4 matches to leave it closer to the drop-zone rather than the top. But manager Dimitrios Grammozis led the side to 6 wins from the next 7 games to get the season back on track and into the top-3 spots before a couple of losses dropped them to 5th in the table. Striker Simon Terrode is the leading-scorer with 11 goals while left wing-back Thomas Ouwejan has cropped up with 6 assists.

The teams are all tightly-packed in the middle of the league-table with only 5 points separating the next 7 teams in the 2.Bundesliga standings.

Despite falling to back-to-back defeats in previous couple of matches, Nürnberg is in 6th position with 21 points after staying unbeaten through the opening 10 fixtures of the season. Their success is based on strong performances at home along with the defensive-unit that has conceded the fewest goals and also produced 7 clean-sheets.

Hamburg began the season as one of the favourites but now it is 6 points off the top in 7th position. It has only lost 1 match this season and is unbeaten in the past 10 games but seem unlikely to secure an immediate return to the top-tier having managed just 1 win during this period. The lack of cutting-edge up front and a leaky defence is their undoing.

Another big club to drop down to the 2.Bundesliga, Werder Bremen is also having a difficult time having taken just 19 points to be in 8th position at the moment. Having earned just 5 wins, unpredictable form has been a major issue for the side as they have been unable to put on a steady run of results over a lengthy period of time.

Heidenheim rounds off the top-half 2.Bundesliga table with 19 points. Initially, the club enjoyed a solid couple of months to the season but it has only 1 win from the last 5 matches and losing the other 4 games. Karlsruher and Hansa Rostock are a point further behind in 10th and 11th positions, respectively while Fortuna Düsseldorf is in 12th spot with 16 points.

While almost 2/3 of the 2.Bundesliga season remains to be played, newly-promoted side Ingolstadt already finds itself in a dire situation. The club has scrapped up 5 points in the tally and finds itself presently 8 points off safety. Moreover, it has the worst scoring-record in the league along with the worst defence and is yet to pick up a victory on home-turf.

Erzgebirge Aue is placed 2nd from bottom in the standings having taken just 11 points from 13 matches this season. Failing to win any of its opening 10 fixtures has left the club with a stiff competition to make its way out of the relegation-spots in the coming weeks. But the team has shown an upturn in form recently having taken 7 points out of the last 2 matches.

With just 12 points so far, Sandhausen currently occupies the spot for the relegation-playoffs The club finds itself in this position after falling to 6 defeats in the first 9 matches but has improved its performances by staying undefeated during the last 3 matches. Moreover, it also has the advantage of a game in hand over the other sides.

Hannover and Dynamo Dresden are the two teams hovering just above the drop-zone with both sides on 13 points at present. Hannover has failed to win any of its previous 6 matches and has the 2nd worst scoring-record in the league. Newcomers Dresden collected 10 points from the first 4 fixtures but have picked up only 1 win since then having suffered 8 defeats in the last 9 matches in the 2.Bundesliga.

Use a welcome offer on EagleBet – such as Neo.bet – and use our 2. Bundesliga, tips and predictions to bet bold on the Champions League. Odds subject to change.