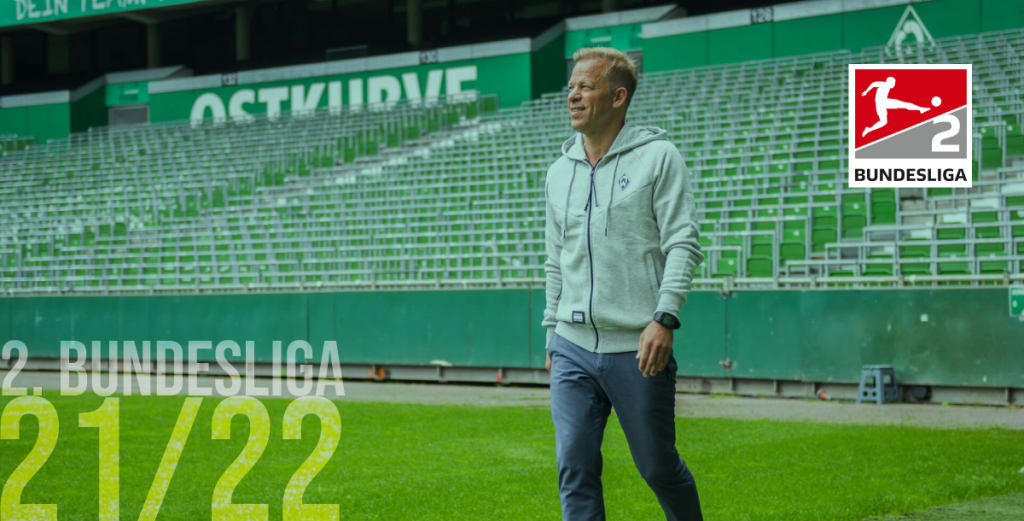 Bundesliga 2 will be fascinating this season with giants Schalke 04 relegated. Here we give predictions, odds, tips and news for the 2021/2 season. Also, you might want to read EagleBet’s 1. Bundesliga betting guide.

Should you bet on Gelsenkirchens’ side to win the league??

They are one of the biggest football teams in Germany and 7 times champions so Schalke’s relegation to Bundesliga 2 is exciting betting interest. Will they implode like other fallen giants and even be relegated, or bounce back to conquer by winning the second tier?

Schalke 04 Are Favourites To Win The Bundesliga 2

Remember they are not the only fallen giants who find themselves outside the top division: Werder Bremen, also relegated, are another huge club – one of six clubs with a 40,000 plus stadium capacity in the division.

We’ve written this 2. Bundesliga 21/22 betting guide because the German second division is one of those incredibly open, even leagues which makes betting so exciting and also makes it hard for the bookies to predict. It’s a division for real football fans and real, clever punters looking for some nice betting odds.

Incredibly, it’s only a decade since Schalke reached the semi-finals of the Champions League but in 15 months the Königsblauen (Royal Blues) managed only two wins, letting in 76 goals and scoring just 18. Ouch.

Owner Clemens Tönnies was accused of mismanagement as they blew circa €150m on transfers and then saw incredible managerial upheaval.

With no gate receipts and no Champions League money Schalke had to slash costs but went about it badly. Relegation hurt an alienated fan-base.

Schalke is now trying to live within its budget in Bundesliga 2.

But given these structural problems, should you bet on Schalke to win the league?
Striker Matthew Hoppe is a target of Spurs, while Leicester are interested in Turkish defender Ozan Kabak.

According to EagleBet’s 2. Bundesliga 21/22 betting guide writers, Schalke 04 should bounce back and win the league so it wouldn’t be the worst bet, but do remember relegation can be a real adjustment, financially as well as on the pitch.

Main rivals to Schalke 04 to win Bundesliga 2 are Werder Bremen (with odds of 10/3) after they were relegated and Hamburg (who are widely on odds of 9/2) who were second and third favourites and considered strong bets by bookies.

Werder have had a good pre-season and have four signings with five leaving. However, they are expecting further departures which makes planning difficult.

Behind them in the outright betting stakes to win the 2. Bundesliga 2021/22 are Fortuna Dusseldorf (odds of 6/1) and Hanover, who the bookies rate at odds of 9/1.

FC Nurnberg and Holstein Kiel are both around 15/1 to win the German second division; while tending to be just behind them are Paderborn at around 16/1.

Karlsruhe and Heidenheim are both around 20/1 to win Bundesliga 2.

With the German Bundesliga 2 set to start on just the 23rd July there is currently little movement in the betting market, suggesting now is the time to get your bets on before odds shorten.

The promoted clubs are an obvious place to start:

The bookies are also worried about Ingolstadt and Aue, all of whom are on 150/1 to win the league (fans can dream – it’s still the close season).

There is no shortage of exciting betting options for German 2. Bundesliga this year in its 34 game season, and at EagleBet we suggest you bet early before odds inevitably shorten as the season starts.

Use one of the great welcome bonuses we have negotiated for you with operators such as Bet365 and many more, then claim your bonus to bet on the 21/22 Bundesliga 2 team you think has the best chance of winning the league.

We can see why Schalke have been made favourites to win the second division by the bookies. However, we feel there is just too much turmoil still around the club and they might need a season of re-adjustment.

Take this as an unbiased betting tip of our 2. Bundesliga 21/22 betting guide.

Werder seems a bit better placed to bounce back and so would be our bet to win the league. The other club odds-wise that pushes Werder Bremen very close for us is Hamburg, so do consider betting on those fallen giants who must be starting to think they have spent quite long enough outside the top-flight.

After reading our 2. Bundesliga 21/22 betting guide, you should check our welcome bonuses to claim before betting on German football second tier.