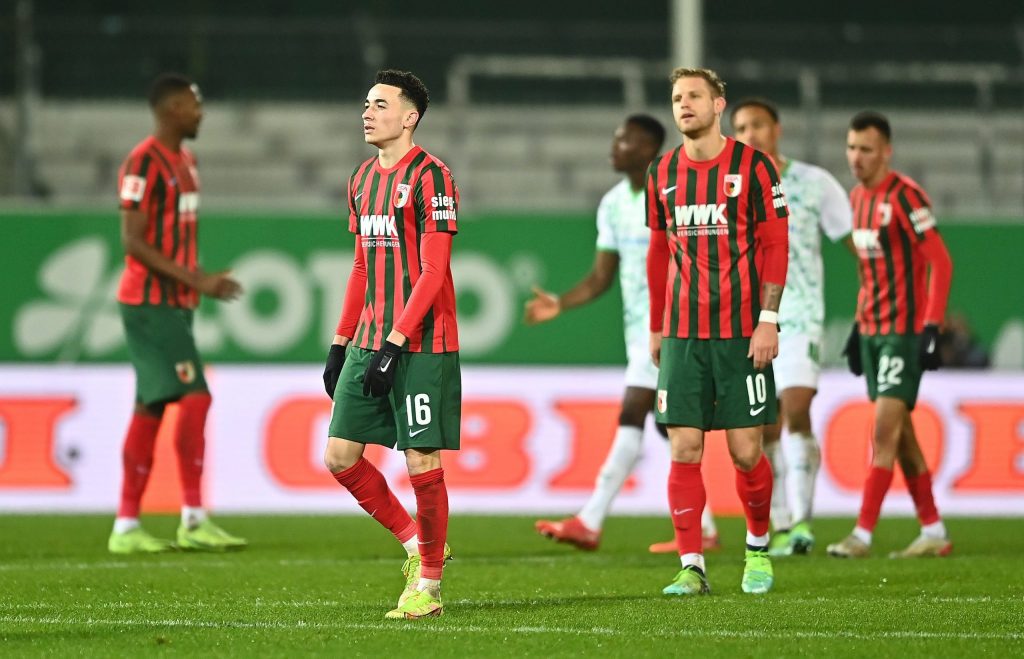 On Sunday afternoon, FC Augsburg will face VfL Wolfsburg at the WWK Arena for their Matchday 28 clash of the 2021/22 Bundesliga campaign. Augsburg is presently hanging right above the relegation-zone in 15th position with 26 points. Wolfsburg lies 5 points further ahead despite only being in 13th spot.

What are Augsburg Odds against Wolfsburg?

What was Augsburg Performance in the last 5 Bundesliga matches?

In spite of collecting 7 points from its last 6 league-matches, Augsburg is separated from the bottom-3 with a superior goal-difference.

Markus Weinzierl does not have any serious injury-issues and may select a 3-4-2-1 system for this fixture. Rafal Gikiewicz will be the goalkeeper while skipper Jeffrey Gouweleeuw, Reece Oxford and Frederik Winther will comprise the 3-man defence in front of him. Augsburg has not done particularly well at the back with an average of over 1.5 goals conceded per game.

Meanwhile, Niklas Dorsch and Arne Maier are likely to be deployed as the defensive-midfielders protecting the backline. Daniel Caliguri has picked up a knock and remains doubtful for this clash so Robert Gumny or Raphael Frambeger will take his spot on the right-wing with Iago taking his usual role on the left-flank.

André Hahn should be the attacking-midfielder behind the strike-pair of Michael Gregoritsch and Rubén Vargas.

What are Wolfsburg Odds against Augsburg?

What was Wolfsburg Performance in the last 5 Bundesliga matches?

After showing exciting form for about a month or so, Wolfsburg tasted consecutive defeats which have brought it nearer to the drop-zone once again.

Florian Kohfeldt will probably choose his usual 3-4-2-1 system although he still has a few crucial injury-absentees for this match. Koen Casteels remains sidelined therefore Pavao Pervan will continue to deputise for him in goal. Maxence Lacroix, Sebastiaan Bornauw and John Brooks will form the 3-man defence.

At the moment, Wolfsburg is conceding nearly 2 goals per game on the road.

Xaver Schagler and Maximilain Arnold have been preferred as the central-midfield duo in the recent fixtures.

Ridle Baku is unavailable for this game therefore Kevin Mbabu will take the right wing-back role with Jérôme Roussillon starting in his usual position on the left-flank.

Maximilian Philipp is also sidelined therefore Max Kruse and Jonas Wind will be the supporting-strikers behind the centre-forward Lukas Nmecha.

Away Team Total Goals: Over 1.5

Bundesliga Matchday 28 Betting Tip – Augsburg has the 5th worst defensive-record in the Bundesliga and has conceded 14 goals in its last 7 games. Despite having an average of just about a goal per game, Wolfsburg has managed to score 2 goals in each of its previous 3 away-fixtures.

Bundesliga Matchday 28 Betting Tip – Augsburg scored 10 times in its past 7 league-matches while allowing the opposition to get 14 goals in return. Wolfsburg has notched 12 goals during its previous 7 Bundesliga matches while conceding 10 goals in the process.

Augsburg has not been able to reap much benefit from home-advantage over the past few months while Wolfsburg has put up some impressive displays on the road lately.
Augsburg 1-2 Wolfsburg at 7.75 on Zodiac Bet