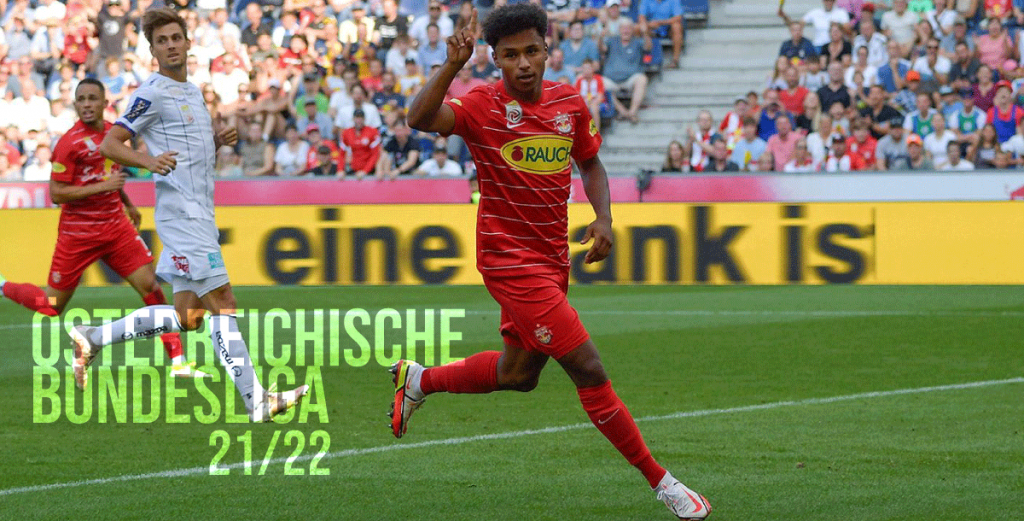 The T-Mobile Bundesliga in Austria has been underway for 2 months now with the 2021/22 close to reaching the midway point of the regular-season.

As expected, Red Bull Salzburg has set the early pace with Sturm Graz and Ried looking as the only possible challengers in the title-race if any.

However, it is extremely tight in the rest of the league with only 3 points separating 4th place Rapid Wien from Swarovski Tirol in the 12th and final position.

Having secured 8 consecutive Austrian Bundesliga titles, Red Bull Salzburg is in prime position to add another one to the collection.

Salzburg has blasted out of the blocks once again, picking up 7 straight victories at the start of the season.
The defending champions have scored the most goals as well as possessing the best defence in the league, conceding just 4 times till now.

Last season’s top-2 goal-scorer Patson Daka and fellow centre-forward Mergim Berisha are no longer at the club but that has not hampered them in the least.

19-year old Karim Adeyemi looks set to take over the mantle and he leads the scoring-charts with 6 goals to his name.
Teenage Slovenian striker Benjamin Sesko, has also contributed with 3 goals thus far.

Centre-back Andre Ramalo and midfielder Enock Mwepu were two massive departures with the vacancies filled in by Polish defender Kamil Piatowski and Nicolas Capaldo from Boca Juniors in Argentina.

The bookmakers favour Salzburg with ludicrous odds and it is extremely difficult to argue against, to say the least.

After clinching a runner-up spot in the Championship Playoffs last season, Sturm Graz has emerged as the closest challengers for the defending champions till now.

But already trailing by 7-points after a mere 7 round of matches, clearly presents the enormity of the task ahead.
Sturm Graz is certainly the second-best team in the league, remaining unbeaten since the opening week against Salzburg.

Striker Kelvin Yeboah is the joint top-scorer of the side with Manprit Sakaria also netting 4 times since his move from Austria Wien this summer.

Sturm Graz seems to be punching slightly above their weight at the moment and will need to continue this form to hold 2nd spot in the coming months.

Another team to make quite a positive start to the season is SV Reid, who presently occupies 3rd spot in the table with 11 points.

This is a pleasant surprise to its supporters considering they were fighting in the Relegation Playoffs at the back-end of the previous campaign.

However, Ried are struggling to score goals, therefore it remains to be seen how long they can continue their run in the top-half.

Being the record-champions of Austria, Rapid Wien will be expected to mount some form of title-challenge.
But at the moment they are in 4th spot and will need to pick up their form to avoid getting drawn into the bottom-half of the standings.

Failing to notch a win as yet, Swarovski Tirol and LASK seem destined for the Relegation Playoffs. Austria Wien also looks likely to join them. Newly-promoted side Austria Klagenfurt has been somewhat of a surprise package so far to stay out of the bottom-3 at the moment.