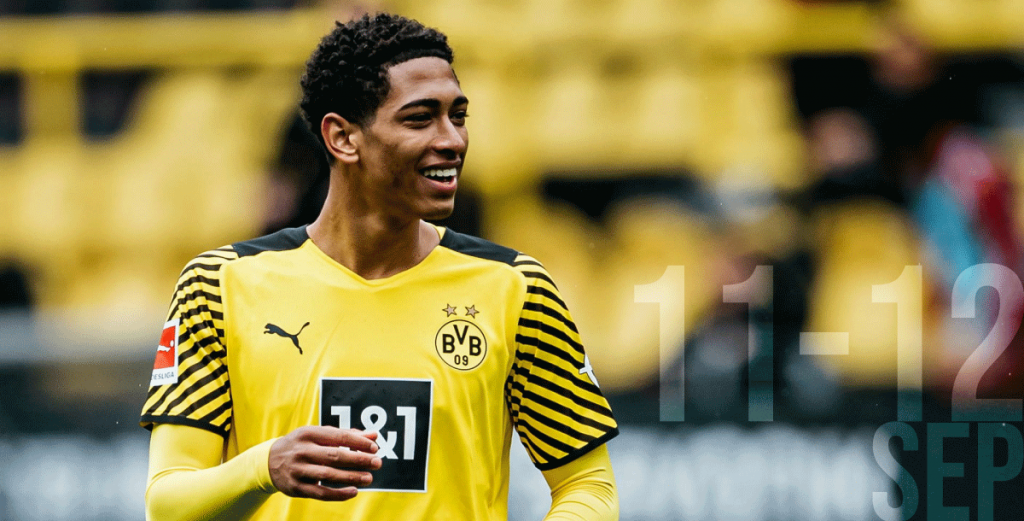 After the international break – or international mess if you include what happened in the Brazil v Argentina match – domestic action returns with the Premier League, Bundesliga, La Liga, Serie A and all the other top divisions in the world. Saturday will also see Ronaldo make his keenly-anticipated return for Manchester United v Newcastle. What a weekend of football we have in store!

Below we give you our personal selection of the five top matches across Europe this weekend, with all your news, odds, predictions and tips to help you bet on your favourite Bundesliga and Premier League action.

For comprehensive betting guides with odds and special markets please also see our expert Bundesliga 1 and Bundesliga 2, Premier League and Championship predictions and tips – as well as a brilliant article taking a detailed look at United’s troubled opponents this Saturday, Newcastle.

The Secret Tipster has also given you his personal Bundesliga Betting guide for matchday 4 for the weekend – which is well worth checking out as his predictions and tips are rapidly becoming the best read betting guide on the internet. He has made millions from online gambling so it’s well worth following his tips and predictions as he sees odds that even the bookmakers miss.
You can find all this and more is in our news section. Elsewhere on EagleBet you will see links to new betting partners that EagleBet has approved – enabling you our valued customers to claim a welcome bonus from a new bookie and, using our tips, make money on your football bets this weekend in the Premier League, Bundesliga, La Liga and Serie A.

After spending the summer selling and buying a virtually new team RB Leipzig have to get their team clicking, but they face a huge challenge this weekend against perennial champions Bayern Munich.
This match will be a real test of their credentials if they are serious about challenging Bayern Munich’s domination and win the Bundesliga.
If this match needed any extra spice after the transfer dealings between the two clubs in the close season, which also saw coach Julian Nagelsmann leave Leipzig for Munich.
They have enjoyed, at best, an inconsistent start under new boss Jesse Marsch, leaving them in 10th place. They brilliantly put four past Stuttgart but sandwiched either side of that was a shock season-opening loss to Mainz and then last time out defeat to early pace-setters Wolfsburg. At least this match is at home as they have lost their last five away.

Bayern looked tentative in an opening day draw but already appear invincible having scored 8 goals in their last 180 minutes of football, against Cologne and Hertha Berlin.
Leipzig have only beaten Bayern once (in the 2017/8 season) although given Leipzig’s young history the clubs have only met 10 times in the Bundesliga with Bayern recording five wins. Bayern won this fixture last season (narrowly) while the previous four ended drawn.

Lewandowski & Neuer Are The Players To Watch

Leipzig midfielder Tyler Adams has said this match is one he dreamed of playing in, but it could end in a nightmare for him: how do you beat a team that has Manuel Neuer almost impossible to score past and Robert Lewandowski almost impossible to stop scoring at the other end (he already has five in three and if this continues could even beat his total of 41 goals in 29 games last time). That said he has only scored in 1 in 6 of his last games against Die Rotten Bullen.
The odds are covered in our Bundesliga match 4 predictions article but we are betting on Bayern Munich in this as the Merkur odds of 2.05 on Bayern Munich to win this are just attractive enough to tempt us.

It is 2nd v 5th in the Bundesliga and there are plenty of positives for both these teams at the early stages of the season, in particular the promise of two 18-year-old midfielders.

Keep An Eye On Both Team’s Wonderkids

Florian Wirtz and Jude Bellingham will battle it out to see who is the most promising young star in the Bundesliga.
Germany’s new head coach Hansi Flick lauded Bayer Leverkusen 18-year-old midfielder Florian Wirtz as the “total package” after he made his international debut in the 2-0 German World Cup Qualifier win over minnows Liechtenstein, becoming the third youngest player to represent Germany since the war.

Meanwhile Liverpool veteran Jordan Henderson praised Borussia Dortmund’s Jude Bellingham after he impressed in England’s 4-0 World Cup Qualifier win over Andorra, declaring him “miles better” than he was at Bellingham’s age.
“Even at such a young age he looks ready to play in the big games,” said Henderson. “I watch him for Dortmund and the way he performs is outstanding.” No wonder Dortmund have said they have no intention of selling him to Chelsea, although there are claims (unconfirmed) that Manchester City have been in touch.

The other player we can’t wait to see in this one is Erling Haaland, who scored a hattrick for Norway against Gibraltar. He has been in red-hot form scoring 12 goals in his last 15 games, and six goals in five games for Dortmund this season.

It is already building up to be an incredibly exciting race to see whether he or Lewandowski will be top scorer in the Bundesliga this season. The only question is whether he is sold in January, with a club like Manchester City potentially interested in triggering his reported €75m (£64m) release clause.

Given he has scored 63 goals in 64 games for Dortmund that almost sounds cheap.

The frightening news for Leverkusen after that hattrick was Haaland declaring he doesn’t score ENOUGH goals – only a great striker with his goal ratio would say that.

“I do not score enough goals, but approach one goal point on average,” he said. “’I personally think that I should have had more goals than matches.’ Hmm.

The odds on this one are dealt with in our Premier League Betting Guide for Match Day 4, but let us just take a moment here to savour the spectacle: Ronaldo back performing at the self-styled “Theatre of Dreams” where his dance routines with the ball as he jinked past defenders established the Portuguese as one of the greatest footballing talents the world has ever seen.

United fans will be ecstatic (even the idiots who burned their “Ronaldo 7” shirts from his first stint at Old Trafford after they wrongly thought he might be returning to Manchester this time to play for City). Incidentally, we are hearing from Juventus sources that the deal with Manchester United was actually nailed on some time earlier, and the Manchester City rumour was more a ruse to push up the price with Manchester United.

His signing will increase Manchester United’s social media following even more, but will it boost United’s points? Ronaldo didn’t ultimately help turn Juventus into a super-club, if anything the reverse. Despite his huge goal tally. We also wonder just what it will do for the authority of their manager Ole Gunnar Solskjær who was probably told rather than consulted about this.

But if you simply want great theatre and great football, this is a match to savour.

Incidentally, if you are interested in Ronaldo, check out all the markets at William Hill including Ronaldo’s odds of winning the Ballon d’Or, to score more than 25 Premier League goals in the 2021/22 season and to outscore Romelu Lukaku. Mouth-watering football and some interesting bets.

This might not look like a massively sexy match on paper but firstly we think it offers good odds and secondly Spurs find themselves top of the Premier League after three games and this will be a test of their credentials if they are in with a chance of beating one of the “big four” to claim a Champions League place.

They have impressed under Nuno Espírito Santo and have managed to keep striker Harry Kane while Son has been in excellent form again and looks genuinely world class – and so dangerous when he gets a sniff of goal.

Tottenham Will Be Missing 2 Stars

But Spurs preparations have been rocked by Cristian Romero and Giovani Lo Celso’s trip to South America against orders, contributing to the debacle of the cancelled World Cup Qualifier between Brazil and Argentina.
They will now be banned from the trip to Palace.

The pair are set to be fined but former Tottenham goalkeeper Paul Robinson has been among those saying it’s “inconceivable” that Spurs did not know of their international plans. He claims that their absence in training prior to their departure would have been noted by management.

Such a row is hardly ideal preparation for a Premier League match.

This only confirms our view that, on average though Palace are, a draw at Neo.bet at odds of 3.45 (subject to change) look massively tempting.

4th play host to 1st in this top of Serie A clash with both teams on six points from two games in a predicted sell-out.
This match could see the return from injury for Milan of veteran striker Zlatan Ibrahimovic – who incredibly is 40, making even Ronaldo, 36, look like a youngster.

A few years ago it would have been inconceivable that a player of such age could compete at the top level but with improved fitness, diet and medical support we continue to be amazed by the longevity of top sports stars – call it, if you will, the Roger Federer phenomenon. He even wants to play for Sweden in the World Cup in 2022.
It’s unclear whether Ibra will start or come off the bench but given that Oliver Giroud is absent through Covid and Ibra’s incredible fight, do not be surprised if he starts.

Milan are favourites for this given home advantage at 2.18, while a draw is 3.55 and an away win is quite an interesting 3.1 – all with Neo.bet, and all subject to change.

We have put a cheeky small bet on Lazio given the fitness issues Milan have in the striker department but at this very early stage in the football season we can’t be too confident. Whatever the result this promises to have an amazing atmosphere and we would dearly love to be in the stadium for this one.

To bet on the Bundesliga, Premier League or Serie A this weekend at great odds, simply follow one of our tips and claim one of the bonus offers we are offering on this page with a book maker like Neo.bet and hopefully place a winning bet.