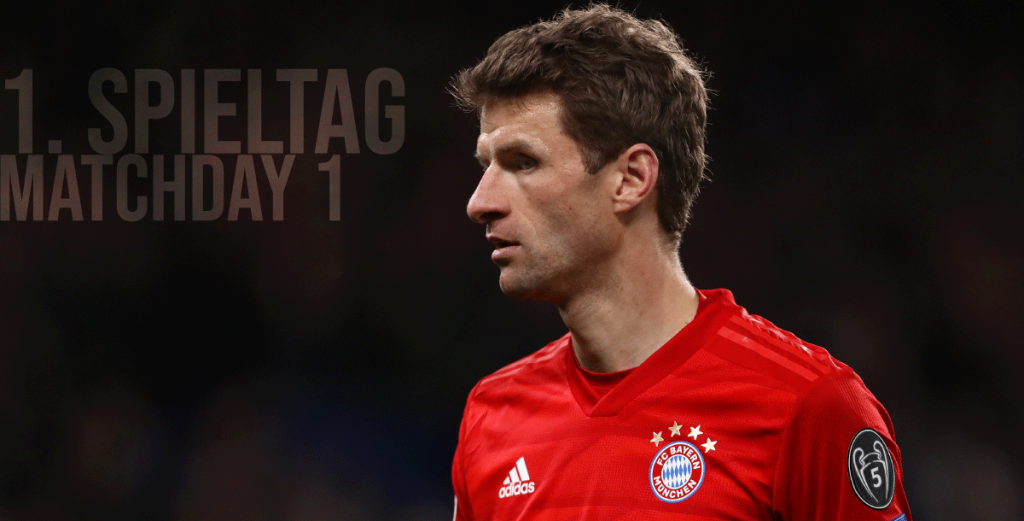 Here at EagleBet we can’t wait for the start of the Bundesliga 1 season 2021/2 on Friday 13/08/21. There are some mega matches. This review deals purely with the first weekend action. Also check out our season preview and predictions for Bundesliga 1.

The Bundesliga computer has certainly thrown up some big matches to excite football fans about the start of the season.

Reigning champions – and they are starting to look like monarchs with God-given rights to rule over the rest of Bundesliga 1 – Bayern Munich face a testing away trip to Borussia Monchengladbach, who finished 8th last season.

Runners up RB Leipzig are also away to Mainz 05 (12th last season).

The first weekend of fixtures for the 21/22 Bundesliga 1 also sees a power battle between Borussia Dortmund (3rd last season) and Eintracht Frankfurt (5th).

Firstly, away fans will not be able to attend until 27/08/2021, match day three. This means that for the first two Bundesliga games, home teams – roared on by their own fans excited for the new season – will enjoy a significant advantage. So if you can’t make your mind up who to bet on in 21/22 Bundesliga 1 for the first and second round of fixtures, our tip is to bet on the home team.

Secondly, opening games of the Bundesliga 2021/22 season are notoriously unpredictable as fitness levels are now such a key part of a game decided by such fine margins. So in the first few weeks of the Bundesliga, consider betting on a long-shot. The odds will be more generous and if ever there was a time for an upset, it is the first or second weekend.

Thirdly – and this is a related point – some of the bigger Bundesliga clubs packed with star internationals might be a bit weaker for the first few games of the season as star players could have been late returning from training following the Euros. So again consider a bet on a Bundesliga underdog in the early rounds of fixtures.

For the first match, the odds on the Bundesliga Champions winning are just ridiculously mean, reflecting yet again that the bookies think this season has already been decided before a ball has been kicked.

However, do consider the odds on Bayern might lengthen a little nearer the match. We also expect Bayern will win but we wouldn’t bet on them at those odds.

Gladbach have beaten Bayern the last two times here in the Bundesliga and their new coach has also had success for Frankfurt against the giants.

If we bet on Borussia Monchengladbach v Bayern Munich, given what we have said above, it might just be the time to risk and bet on a draw, which surely represents value at 17/4.

Augsburg v Hoffenheim could easily go any one of three ways, but our tip is a draw here.

Probably against our better judgement we think home advantage might just be enough to give victory on this opening Bundesliga weekend to Bielefeld.

Borussia Dortmund v Eintracht Frankfurt is a really big match for the first game of the season. The EagleBet sports betting specialists think this Bundesliga battle could be closer than the bookies are predicting, judging by their odds for this opening fixture.

Frankfurt are a good Bundesliga team and we think they will score, but the EagleBet tipsters’ prediction is that Dortmund will win this by a single goal.

Koln vs Hertha Berlin Predictions For The Bundesliga Matchday 1

Koln and Hertha used to produce some high scoring matches (in both directions) but last season saw these two Bundesliga strugglers play out two goalless draws. The draw again looks attractive to us, particularly at those odds.

The EagleBet betting specialists panel think the bookies have over-priced Leipzig for this one. Sure, they are favourites but we wouldn’t back them at those odds with no fans behind them. Mainz actually beat Leipzig in this fixture last season. So our tip in this opening round Bundesliga fixture would be for a draw at fairly generous odds.

Two strong, evenly matched teams here. But our money is on a home win.

Union Berlin are strong at home – they won this fixture last season and drew away – and have also enjoyed an impressive pre-season, beating Nice and Bilbao. Leverkusen have lost their manager and one of their best players. Plus their defence is leakier than an English summer.

As for Stuttgart, they are a little stronger than Gr Furth but the odds are too short for a home win in this Bundesliga opening fixture for us. The draw looks a good value bet to us.

In the final match, we think Wolfsburg will prove way too strong for Bochum so while the odds are not that attractive, this looks as near as you can get to a safe Bundesliga bet on the first weekend of the 2021/2 season.

Keep your own money in your wallet. Instead click one of the links you see on this page for one of our partner operators (not one you already may have an account with), or study the bonus offers here. Then claim their welcome offer.

These are special deals we have negotiated for our customers and come with added benefits.

And using at least one of the tips our football betting experts have given you detailing all the popular bets, place your bet and hopefully win some money.

Check our site regularly for news, predictions, odds, tips and expert analysis. It is updated daily.

Soar with winners here on EagleBet.