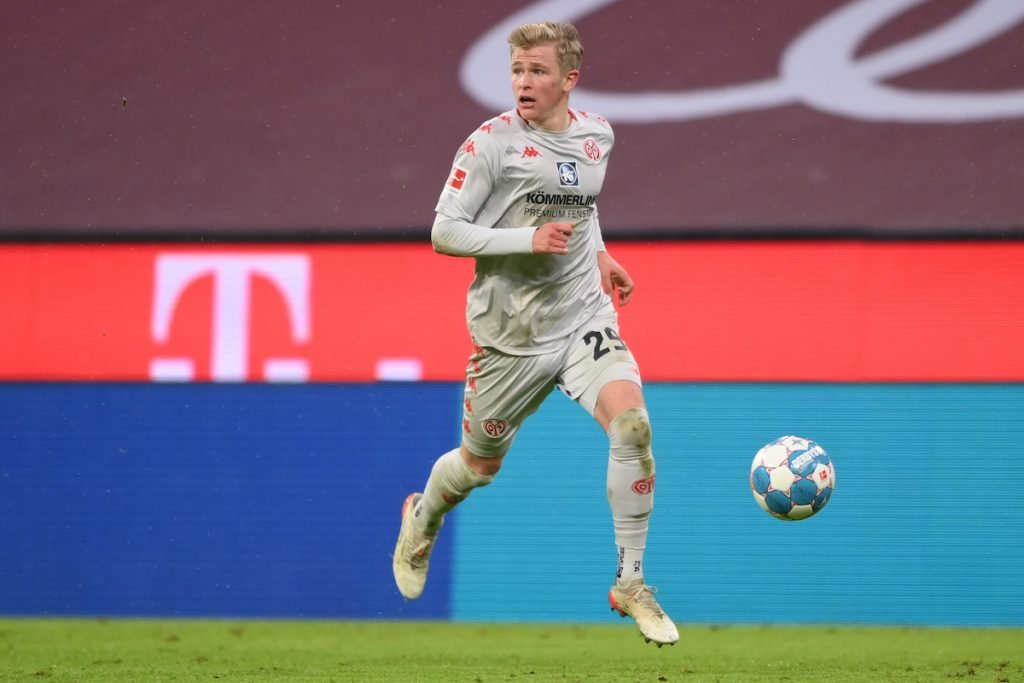 On Saturday afternoon, FC Augsburg will host Mainz 05 at WWK Arena for their Matchday 25 clash of the 2021/22 Bundesliga campaign. Augsburg lies in 14th position with an 8-point gap to the drop-zone. Mainz stays on the edge of the top-half in 9th spot due to its poor away-form.

What are FC Augsburg Odds against FSV Mainz 05 ?

What was FC Augsburg Performance on the last 5 Bundesliga matches ?

Augsburg has picked up 7 points from its last 5 fixtures but injuries might force manager Markus Wienzierl to stick with the 3-5-2 formation from last week.

Scoring enough goals is a perennial problem for Augsburg with the club averaging just over 1 goal per game this season. Alfred Finnbogason is still on the injury-table therefore Michael Gregoritsch remains the main striking-option up front with support from the likes of André Hahn and Ruben Vargas from midfield along with Iago and Daniel Caligiuri on the wings.

According to our Bundesliga betting tips team While Augsburg relies heavily on defending, it has not really done a good job of it with an average of over 1.5 goals conceded per game on home-turf. The injury to Robert Gumny might leave the team operating with a 3-man defence comprising Reece oxford, Niklas Dorsch and Jeffrey Gouweleeuw with Arne Maier and Carlos Gruezo as the two holding-midfielders.

What are FSV Mainz 05 Odds against FC Augsburg ?

What was FSV Mainz 05 Performance on the last 5 Bundesliga matches ?

Mainz does not have any major injury concerns at the moment, yet it has not been able to move up the standings due to its wretched away-form.

Bo Svensson will probably line up his team in the 3-4-2-1 system that he has preferred lately. Mainz owns the 4th best defensive-record in the Bundesliga, although that ranking drops to 11th spot away from home. Alexander Hack will be absent after picking up his 5th yellow-card so Leandro Martins is likely to feature alongside Stefan Bell and Moussa Niakhaté in the 3-man backline.

As usual, Mainz has endured some dry periods in front of goal, especially on its travels, with the club averaging less than 1.5 goals per game this season. Karim Onisiwo is likely to start as the centre-forward with Jonathan Burkardt and Lee Jae-Sung as the two supporting strikers. Silvan Widmer will line up in his regular spot on the right-wing with Aarón Martín on the opposite flank.

Augsburg has kept just 2 clean-sheets at the WWK Arena this season but it has scored a goal in each of the last 10 home-games. Mainz has failed to score in only 2 of its last 10 away-matches although it shipped in 20 goals during this period.

Win Either Half: Augsburg

Despite hovering in the lower end, Augsburg is in quite steady form at home with 4 wins and just 2 losses in its 12 home-games so far. Mainz has the worst away-record in the Bundesliga with 10 defeats in its 12 league-matches on the road.

Despite having a rather blunt attack, Augsburg has managed to score 14 goals in the last 4 league-matches on home-soil. On the other hand, Mainz has conceded exactly the same amount of goals in its previous 7 away-matches.

Highest Scoring Half: 1st Half at 3.00 on Zodiac Bet

Half Time/Full Time: Draw/Augsburg at 6.00 on Zodiac Bet

Considering the steady form Augsburg has shown at home and the dreadful displays from Mainz on the road, a home-win looks the most possible outcome.