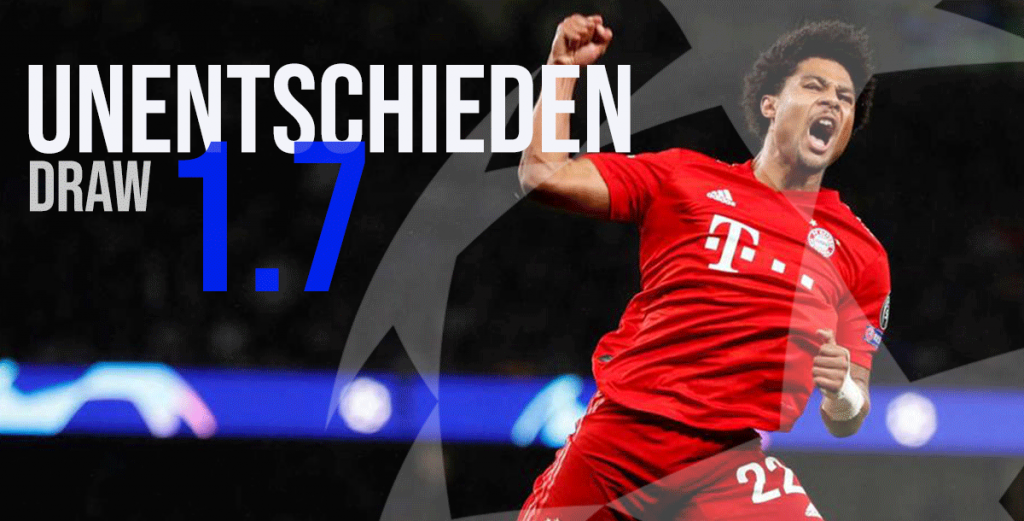 The below Champions League betting guide is brought to you courtesy of popular bookmaker ZodiacBet offering excellent welcome bonuses. We select our betting partners carefully as EagleBet values its reputation: we recommend you bet on the Champions League with our betting guide through ZodiacBet because we like their odds and welcome offer. Many of our readers have signed up to ZodiacBet and are positive about speedy withdrawals and the customer experience.

So claim your welcome bonus then use our Champions League betting guide with our CL pro tips and predictions to place winning bets. Good luck!

Last 16 matches are played over two legs.
The first legs are scheduled for February 15-16.
The second legs of the Champions League last 16 March 8-9.
The draw had to be re-done after a mistake involving Manchester United’s ball.

The Bundesliga Champions won all six of their group Champions League matches, which has been reflected in our Champions League betting guide which has consistently been predicting a Bayern victory. In that run they scored 22 and conceded just three goals. That’s dominance by anyone’s standards, and makes betting tips for Bayern very easy!

Bayern continue to play a high line under Julian Nagelsmann, which allows them to dominate teams. The fascinating question is whether the really top teams will be able to spring the trap. The other question is whether, assuming they do progress to the later stages of the tournament, their relatively small squad will stand up to injuries.
Salzburg are a very decent team, even at this rarefied level, particularly at home, beating Wolfsburg 3-1, French champions Lille 2-1 and Sevilla 1-0. We think Bayern could be in for a match in Austria but our CL prediction is that over two legs they will have too much for Salzburg.

EagleBet Champions League tip: We think Bayern will win over two legs but betting the draw for the first leg at CL odds of 5.25 is not a crazy bet

Manchester City had a tough group stage but ultimately – as we predicted in our Champions League Betting Guide – triumphed by finishing above PSG and RB Leipzig, despite the latter’s impressive performances.

Sporting actually lost half their group stage matches and their very open style should play into City hands. City’s weakness is a lack of a strong target man – they have no Lewandowski. But what they do have is enough brilliant midfielders to satisfy three other Champions League teams – which is why punters who do bet on City don’t end up losing too much money.

Kyle Walker will be suspended for the first match which could be exploited but, this Champions League betting guide confidently predicts, not by enough to seriously threaten City.

EagleBet Champions League tip: This is a solid bet but not massive value

Sébastien Haller is starting to show Lewandowski goalscoring prowess and has to feature in any betting tip to be anytime scorer in the Champions League at the moment.

Ajax managed 20 goals in the CL group stages, only bettered by Bayern.

But don’t write off Benfica, who are starting to look serious in Europe once more. Domestically, like Ajax, they might not be top of the league but have kept four clean sheets in the CL so far and thrashed Barca at home. They also scored twice away to Bayern. But still our Champions League betting tip would be to bet on Ajax.

EagleBet Champions League prediction: Ajax – but it could be close

EagleBet Champions League tip: Nicer odds and unless Ajax suffer a dip in form we would be tempted to bet the away win

Chelsea will be relieved. They failed to hold top spot after only managing to draw away at Zenit but were not punished: they should beat Lille. We admit it: our betting tip was that they probably would beat Zenit but this failure shows their form has dropped a little. But our strong CL prediction is that they will have recovered strongly in time for this one.

True, after a poor start to the season Lille have been better lately under new manager Jocelyn Gourvennec – unbeaten in nine. But they remain mid-table in the league and last season’s league triumph is a million miles off. They sat deep against Wolfsburg and scored on the counter but Chelsea manager Thomas Tuchel demands tightness at the back, and he should be able to instil enough solidity to keep Lille chances to a minimum.

EagleBet Champions League tip: the odds are not great but our strong betting tip would be to bet Chelsea home win

Arguably, neither of these sides really deserve to be here in the last stages of the Champions League. Atletico were frankly woeful in a lot of the CL group games, not even scoring in three of them. They were pretty lucky to beat Porto.

United may still be in search of the next Alex Ferguson but they relied big time on that old magic ingredient known as “Fergie Time” to score desperate last gasp goals in the Champions League group stages. Ronaldo has had his critics but if it were not for his late Champions League goals, United wouldn’t be here. Our betting tip would not only be to bet on United, but also on Ronaldo back in Madrid.

EagleBet Champions League tip: For the first leg we would bet Man Utd draw no bet

Juve have also been lucky in the Champions League. With two weak teams in their group anything but qualification would have been disaster.

Villarreal are just 13th in La Liga, so hardly in brilliant form.

Juve are only 6th themselves in Serie A and are trying to recover from off-field problems and a crazy transfer policy.

We can’t see them going that much further, and they won’t feature in an Eagle Champions League betting guide to win the tournament. But we predict Juve should win this one.

Oh, what might have been: in the abandoned draw PSG would have been drawn at home to Man Utd, setting up a Messi v Ronaldo ego-fest.

How we would have loved to write about that in this Champions League betting guide!

Still, PSG v Real Madrid ain’t bad. Unless you are Madrid, of course: in the first draw they got Benfica. What a shambles! They, my friend, are not happy.

Madrid have won their last 10 games across all competitions after a really poor match. Indeed, they even lost at home Sheriff early in the group stages.

A lot for the Spaniards depends on the mercurial Karim Benzema and promising Vinícius Júnior.

With PSG, we can’t quite work out what to make of them and this is probably the toughest tie of the round to predict as it could genuinely go either way.

We remain unconvinced by PSG, though – their domestic dominance saying as much about the French league as about PSG.

As with Ronaldo at United, Messi demands inclusion but it is not clear that works for the team: an apparently brilliant attack blunted by a lack of midfield starting numbers.

EagleBet Champions League tip: If we bet anything here it would be the draw as most value in a finely balanced tie but we can’t be confident

Liverpool are playing beautifully this season but Inter are top of Serie A with five straight wins: this should be quite a tie.

Edin Dzeko is 35 but is still looking good and the loss of Lukaku hasn’t been the blow many expected.

But Liverpool have, at times, looked unplayable in the Premier League this season and with Mo Salah have one of the top match winners in the world.

It is no surprise punters have been making money from our betting guides backing Liverpool.

They should be too strong.

EagleBet Champions League tip: We thought about draw no bet Liverpool but unless Liverpool suffer a drop in form we would risk Liverpool the way win