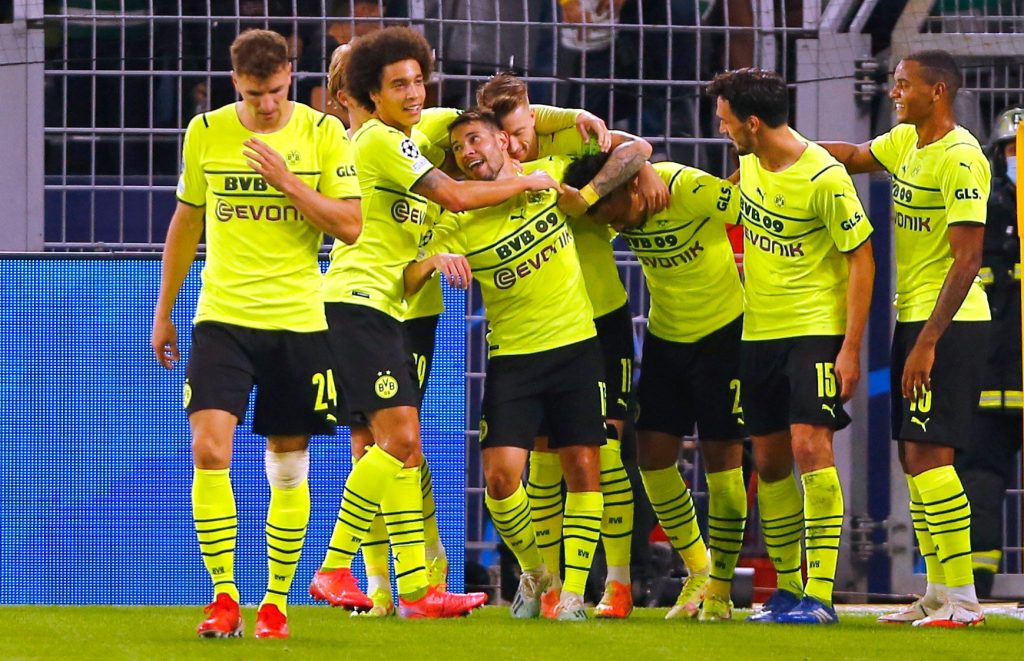 BVB 09 Borussia Dortmund v RB Leipzig Top Bundesliga Betting Tips and Predictions. In the evening fixture of this Saturday’s proceedings in the 2021/22 Bundesliga campaign, BVB Borussia Dortmund will take on RB Leipzig at the Signal Iduna Park. Dortmund dropped 6 points behind the league-leaders once again after a stalemate in the previous round. Leipzig retained 4th spot in the table despite being held to a draw.

What are Borussia Dortmund Odds against Bochum?

What was Borussia Dortmund Performance in the last 5 Bundesliga matches?

With only 7 more fixtures remaining in the season, this is almost a must-win encounter for Borussia Dortmund in order to keep the title-race going into the last few weeks.

Having nearly all first-choice players back in the squad, Marco Rose could choose to line his team in a 4-2-3-1 formation. While Mats Hummels is available, Marin Pongracic and Manuel Akanji may be used as the centre-back partnership with Gregor Kobel taking his place in goal.

Thomas Meunier and Felix Passlack are both out injured so Emre Can will probably move to the right side of the defence with Raphaël Guerreiro on the left.

Axel Witsel and Mahmoud Dahoud are likely to be the two holding-midfielders in front of the backline. Julian Brandt may be preferred over Thorgan Hazard on the left-side of the midfield while Jude Bellingham will possibly start on the opposite flank.

Marco Reus will take his position Erling Haaland in the centre-forward position. Borussia Dortmund averages more than 3 goals per game at home.

What are Leipzig Odds against Borussia Dortmund?

Having made considerable improvements to its away-form under the new manager, Leipzig will fancy its chances of earning a significant victory here.

Domenico Tedesco is certain to set his team in the 3-4-1-2 system that he has openly favoured in recent weeks. Lukas Klostermann is still sidelined so Mohamad Simakan will continue in the 3-man defence alongside Josko Gvardiol and Willi Orban with Péter Gulácsi between the posts.

At the moment, Leipzig possesses the best defensive-record in the Bundesliga away from home.
In the middle of the park, Konrad Laimer and Kevin Kampl are expected to be the central-midfield duo.

Nordi Mukiele might get to start in the right wing-back slot with Angeliño on the left flank. Emil Forsberg will probably start in the no.10 role behind the strike-pair of André Silva and Christopher Nkunku. The Leipzig attacking-unit has looked in particularly good form on the road in recent weeks.

Bundesliga Matchday 28 Betting Tip – Borussia Dortmund has managed to score at least 3 goals in 7 of its 13 league-games at home this season but only 1 clean-sheet against a team from the top-half. In addition, Leipzig has got at least 2 goals in 4 of its last 5 away-matches in the Bundesliga.

Away Team Total Goals: Over 1.5

Bundesliga Matchday 28 Betting Tip – Borussia Dortmund has allowed the opponents to get 9 goals in its previous 6 home-games despite keeping 3 clean-sheets. On the other hand, Leipzig has managed to score 17 times in the previous 5 Bundesliga matches on the road.

RB Leipzig has been in solid form this year but Borussia Dortmund is in good shape as well and does not need much more incentive to push for a win at all costs.
Borussia Dortmund 3-2 Leipzig at 21.0 on Zodiac Bet