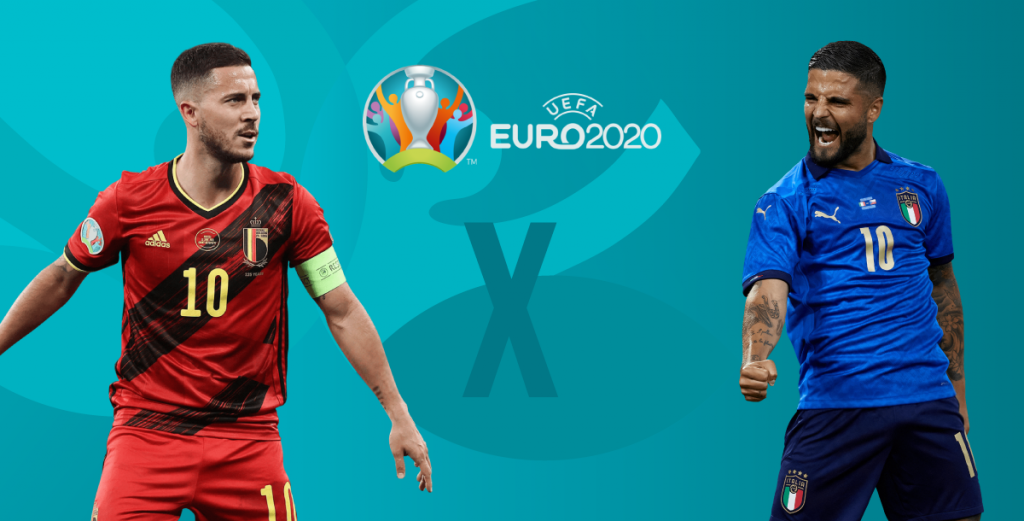 Italy to beat Belgium 2-1 with Ciro Immobile and Romelu Lukaku is the best betting tip EagleBet can provide. Find all of our other great Euro 2020 quarter finals predictions below!

The 2020 UEFA European Championships is starting to hot up as the competition has reached the Quarter-Finals stage of the tournament and the Belgium vs Italy fixture to be played at the Football Arena Munich, Germany, is arguably the biggest and best Euro 2020 Last 8 match available on the schedule.

Because of all the great Euro 2020 betting opportunities available, we suggest checking out all of our Belgium vs Italy betting tips and predictions EagleBet has to offer!

Betting On The UEFA Euro 2020 Quarter-Finals

Neither of the sides are yet to play a match at the Football Arena Munich, Germany, yet, but this should not spoil the entertainment and the football action that sports betting fans and football supporters can expect to enjoy when Belgium vs Italy takes place.

Both nations are amongst the Euro 2020 betting outright favourites to win the competition, whilst both have also been able to play some top football and beat some top opponents in order to reach this stage of the competition.

Belgium were placed in a group that saw them have to compete with the likes of Russia, Denmark and Finland and managed to get out of it easily as they came out with a 100% win record, thus topping Group B.

They were rewarded with an encounter against Portugal in the Round of 16 and managed to keep the likes of Cristiano Ronaldo quiet enough as a superb wondergoal from Thorgan Hazard was enough to set up the Euro 2020 Quarter-Final tie with Italy in Germany.

Roberto Mancini’s side have been impressive throughout the Euro 2020 tournament, as well, with many predicting that they will go on and win the competition outright at this stage already.

Of course, the Italians managed to successfully navigate Group A as they also had a 100% record after winning against Turkey, Switzerland and Wales without conceding a goal.

However, the Azzurri found it a little more challenging in their Round of 16 football match, as they conceded their first goal of the tournament whilst also being taken to extra time by Austria.

Nonetheless, their 2-1 win was enough for the nation to progress and advance.

Last Matches Between Both Teams

When looking at the last meetings between the two sides, Belgium vs Italy only really reads one way; in favour of the Italians.

Prior to the upcoming Euro 2020 Quarter-Final showdown between the two sides, they have met 22 times, with Italy winning 14 of those and the other eight games being split as 4 draws and 4 defeats.

There have only been two meetings in the European Championships since the 2000 edition, with both having ended up as 2-0 victories for Italy (2000 and 2016).

Belgium have shown that they can rely on a number of different players to score their goals, however Romelu Lukaku would be a great Euro 2020 Belgium vs Italy betting tip as a goalscorer against Italy on Friday.

The striker plays his club football in Italy for Inter Milan and will have played with and against many of the players in the Italian defence, thus giving him an edge. Lukaku is also still in the race for the Euro 2020 Golden Boot, as he has 3 goals and is just 2 behind Cristiano Ronaldo as the top goalscorer.

With a team full of players such as the Hazard brothers, Kevin De Bruyne, Dries Mertens and other great options, another Euro 2020 Belgium vs Italy betting tip would be to expect Belgium to get on the scoresheet, despite Italy’s incredible defensive record.

Italy are also blessed with great attacking options, although they have managed to share the goalscoring responsibility amongst a number of different players.

Ciro Immobile is perhaps our first pick in this Euro 2020 Belgium vs Italy prediction for Italy in this game as the SS Lazio man has 2 goals, but so does Manuel Locatelli and Matteo Pessina. Other options for Mancini include Federico Chiesa, Lorenzo Insigne, Andrea Belotti and Domenico Berardi.

With those in mind, one betting prediction would be to expect Italy to score at least one goal in this Euro 2020 Quarter-Final fixture.

The best betting tip and prediction EagleBet can provide is that Italy will win 2-1 against Belgium on Friday at the Football Arena Munich.

Our next best betting tip would be to expect Romelu Lukaku and Ciro Immobile to both get on the scoresheet at any time in the game, as well.

Looking for more Euro 2020 betting tips like this Belgium vs Italy predictions? Then you better check out all of the UEFA European Championship 2020 articles now and claim some of the best betting bonuses available.