Euro 2020 Round of 16 Croatia vs Spain Predictions 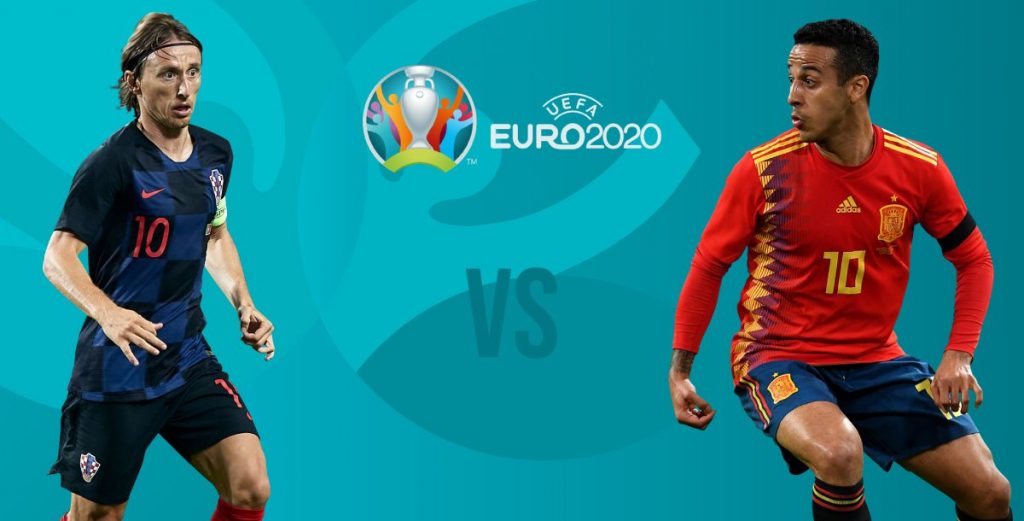 Croatia vs Spain Euro 2020 Standout Round of 16 Fixture

One of the standout ties for the upcoming 2020 UEFA European Championships Round of 16 matches to take place is the game that will see Croatia vs Spain happen.

The two teams are amongst some of the better squads still remaining in the football competition and will be looking to advance as far as they can, despite not necessarily being considered to be one of the Euro 2020 outrights betting favourites but still OK to write a few Croatia vs Spain predictions.

Nonetheless, this has allowed both football sides to go under-the-radar in the tournament, and a win for either side in this match could make life very interesting for the two competing football nations, as well as those who continue to use the EagleBet Euro 2020 Round of 16 betting tips to boost their odds this summer!

The game has been scheduled to happen at the Parken Stadium in Copenhagen, Denmark, on Monday 28 June and will kick off at 17:00 GMT.

It is worth noting that neither of these sides are yet to play at the Parken Stadium in this competition, therefore Euro 2020 betting could be rather interesting when considering the venue being used; especially as Spain have essentially been playing ‘home’ matches throughout the tournament so far.

There are a number of Croatia vs Spain predictions available to make based on each national football team’s current form in the competition, with their route to the first knockout game having been rather mixed.

Starting with Croatia, they managed to qualify from Group D, but with a record that saw them lose to England 1-0, draw 1-1 with Czech Republic and defeat Scotland 3-1 to finish second in the group and book a place at the Parken Stadium.

Spain also had a rather mixed Group Stage, as they also finished second in their group. Competing in Group E, La Roja managed to remain unbeaten but draws to Sweden (0-0) and Poland (1-1) made life uncomfortable for Luis Enrique’s side. However, a 5-0 victory against Slovakia meant that they qualified. Is it meaningful for our Croatia vs Spain Predictions? Find below.

One of the best Euro 2020 betting tips and predictions is to look at the players each team has available to them and try to predict who may get on the scoresheet and help their team to ultimately progress to the quarterfinals of the competition.

Unfortunately, those bettors who are looking at the top goalscorer outright market might find it hard to find a winning Euro 2020 bet even after reading our Croatia vs Spain predictions, but there is still some top Euro 2020 betting tips to be found when looking at this game.

Spanish players like Gerard Moreno and Alvaro Morata who have both missed penalties and have struggled in front of goal, but expect them to find their shooting boots in the upcoming Euro 2020 Round of 16 match, which’s why they are our as top Croatia vs Spain predictions to score.

Let’s not forget, Luka Modric scored a screamer against Scotland, whilst Ivan Perisic keeps providing Croatia with goals, so expect the Inter Milan winger to add to the two he has already against La Roja.

Our best EagleBet betting tips for the upcoming Euro 2020 Round of 16 encounter is that Spain will beat Croatia 3-1 at the Parken Stadium, Denmark, on Monday 28 June.

Expect both Morata and Moreno to score for La Roja, whilst another Euro 2020 Round of 16 Croatia vs Spain predictions would be to place a wager on Perisic to score for Croatia, as well.

Make sure to check out all of the Euro 2020 betting tips EagleBet has to offer throughout the football tournament!

Boost your odds with our Croatia vs Spain predictions article plus amazing betting bonuses available.