Euro 2020 Round of 16 England vs Germany Predictions 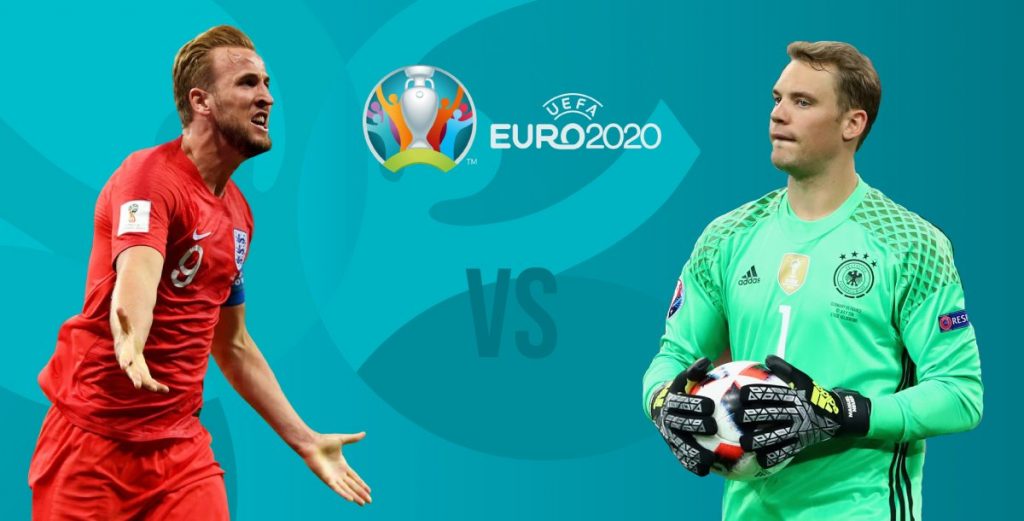 Arguably the biggest and most appealing 2020 UEFA European Championships Round of 16 match to be played imminently is the England vs Germany tie that will be played at Wembley Stadium.

The two sides are amongst the Euro 2020 winner outright favourites, with both national football teams having squads full of world-class talent and natural-born winners, despite the fact that the competition has not gone as well as many would have initially have expected it to.

Nonetheless, there is still plenty of excitement around this Euro 2020 Round of 16 game, with many looking back at the UEFA Euro 1996 game as an iconic moment involving the two sides. However, that was 25 years ago and sports bettors will want to use the EagleBet England vs Germany predictions and football betting tips to ensure they have a positive betting experience.

England arguably have home advantage when the two teams meet on Tuesday 29 June, as England vs Germany will take place at Wembley Stadium, with kickoff at 17:00 GMT.

Of course, the Three Lions have been playing each of their games in the Euro 2020 Championships at the stadium already, whilst Germany are yet to play away from their ‘home’ crowd as each of their games so far have been at the Football Arena Munich, Germany. Find out our Euro 2020 Round of 16 England vs Germany predictions below.

When thinking about trying to make the best Euro 2020 Round of 16 predictions, it would be wise to take each of the team’s current competition form and look at how they managed to progress to the knockout stage of this football competition.

Germany had a rather difficult route to the Euro 2020 Round of 16 match, having only just successfully navigated the competition’s Group of Death, Group F. A 1-0 defeat to France started things off badly, but a 4-2 victory over Portugal helped them position themselves in a good position. A 2-2 draw with Hungary was hard-fought, and one that looked in doubt at one point, though.

Indeed, it could be argued that one good England vs Germany betting tip is that with it being the knockout stages of the competition, both football teams will know that the game has a lot more on the line; something that Germany have essentially already experienced in the European Championship 2020 when they met Portugal.

Players To Watch In The Euro 2020 England vs Germany

Even though the Round of 16 match is packed with a number of world-class players who all have the potential to become top goal scorers in this Euro 2020 competition, there will have been many bettors who will have been disappointed with what they have seen. But that doesn’t affect our England vs Germany Predictions.

For instance, prior to the tournament, both Harry Kane and Timo Werner were backed amongst the favourites to be the Euro 2020 outright top goalscorer, but neither of them have managed to score a goal yet, against our best predictions.

Indeed, England have had Raheem Sterling to thank for both goals that have been scored in the current football competition, whilst Germany have had Kai Havertz (2), Robin Gosens and Leon Goretzka both score (as well as a helping hand from two own goals against Portugal).

Nonetheless, with this encounter being one of the biggest Euro 2020 Round of 16 matches to take place, our England vs Germany predictions experts expect Harry Kane and Kai Havertz to both get on the scoresheet in this game and make a difference.

Our Best England vs Germany Predictions

The score prediction that our EagleBet betting tips team have come up with for this Euro Round of 16 game is that Germany beat England 2-1.

As mentioned, a Euro 2020 goalscorer betting tip is to back Kane and Havertz to both score, as well.

However, with both teams having been rather disappointing and with plenty of history based on the game, there are always going to be a number of great Euro 2020 betting opportunities available!

If you enjoyed reading our England vs Germany predictions, make sure to continue to check out all of the Euro 2020 betting bonuses EagleBet has to offer throughout the football tournament!