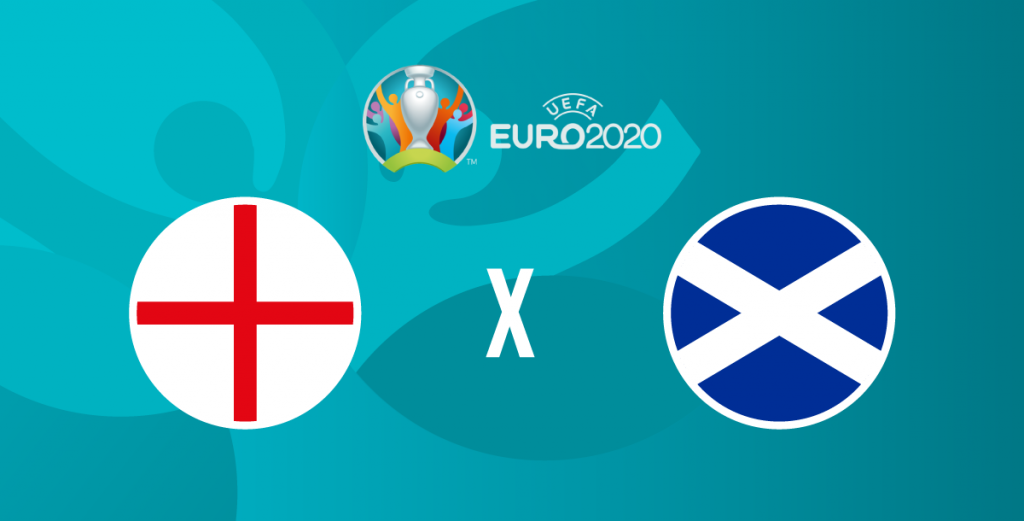 England to win 2-0 against Scotland is the best football betting prediction, with a betting tip being Harry Kane to score at any time. Check out what the EagleBet team thinks.

This is one of the most anticipated Euro 2020 matchday 2 fixtures of this international tournament, with both football sides being huge rivals and foes that have plenty of history when it comes down to previous games that they have played in.

The 2020 UEFA European Championships have been contrasting for both European teams, though, which is what will likely make this contest one of the games of matchday 2 and one that will provide EagleBet readers with all the best potential betting markets and odds possible to bet on the Euro 2020 England vs Scotland.

England started off their Euro 2020 campaign in top fashion as they managed to brush aside Croatia in their opener when Raheem Sterling got the only goal of the game in a 1-0 victory.

Although the scoreline might not suggest it, the Three Lions dominated every single aspect of their encounter with their competitive rivals as Croatia failed to get anything of substance sorted.

Scotland, on the other hand, were handed a defeat by the Czech Republic, with Patrik Schick scoring both of the goals in the 2-0 defeat, including a wondergoal from 47 yards that ‘keeper David Marshall could not do anything about.

The Scots were not awful in that game, however they have left themselves in a must-win position when they face the old enemy at Wembley Stadium on Friday 18 June.

A win for England will see them advance to the next stage of the Euro 2020 competition and this is probably the most safe betting tips for this match.

As to be expected, there have been a number of previous encounters between the two sides throughout history, but none are perhaps as famous as their meeting in the Euro 1996 group stages that was also played at Wembley Stadium.

The game, which also took place in matchday 2, saw England win 2-0 after Alan Shearer and Paul Gascoigne’s wonder strike (accompanied with the famous “dentist chair” celebration” sealed the three points on the day, with Gary McAllister having missed from the penalty spot to tie the game when David Seaman saved the kick.

However, there have been other meetings in recent memory that have seen the football fixture be a little tighter, with their most recent meeting in 2017.

Played at Hampden Park as part of a qualifier for the FIFA World Cup in 2018, the game finished 2-2 after Leigh Griffiths scored twice in the last three minutes of the game to take the lead following an Alex Oxlade-Chamberlain goal. Harry Kane, though, scored a late goal to level things deep into stoppage time.

When looking at the key stats as potential betting tips and the opportunity to make a prediction about what may happen in England vs Scotland, it will be important to look at the top goalscorers and assisters within the sides.

For England, Sterling has continued his fine form in front of goal when he netted the only goal against Croatia, thus making him a popular Euro 2020 betting option, whilst Kalvin Phillips was instrumental in providing the assist for the Manchester City attacker.

Scotland are yet to register, but matchday 2 could provide them with a great opportunity with the likes of Che Adams and Ryan Christie potentially causing problems.

Players To Watch During The Euro 2020 England vs Scotland

Naturally, with a number of different stars on the pitch, it would be wise to keep an eye on certain players on the pitch when thinking about England vs Scotland betting tips that can be followed.

Harry Kane will be looking to get his goal account for the tournament started as he aims to become the Euro 2020 top goalscorer, whilst Sterling will also want to add to his tally. Furthermore, there will be the likes of Phillips, Mason Mount and Phil Foden who will all want to continue to impress, whilst Marcus Rashford and Jack Grealish can both shine if given the chance.

Many of Scotland’s players play in the English Premier League and will want to prove that they can continue to compete at the highest level, whilst others may want to show that they have the ability despite still playing in Scotland’s Premiership.

The Scotish players to watch according to our England vs Scotland betting tips writers include Adams, Christie, Callum McGregor, Andy Robertson, Kieran Tierney (if fit) and potentially Kevin Nisbet if he is given the opportunity.

Our betting tips and predictions writers expect England to have too much quality for Scotland and win 2-0 when they meet at Wembley on Friday 18 June.

Another England vs Scotland prediction is that Harry Kane can finally get on the scoresheet at any moment in the game, as well.

For more Euro 2020 betting tips and predictions, make sure to follow all of the great EagleBet articles to be provided throughout the competition.