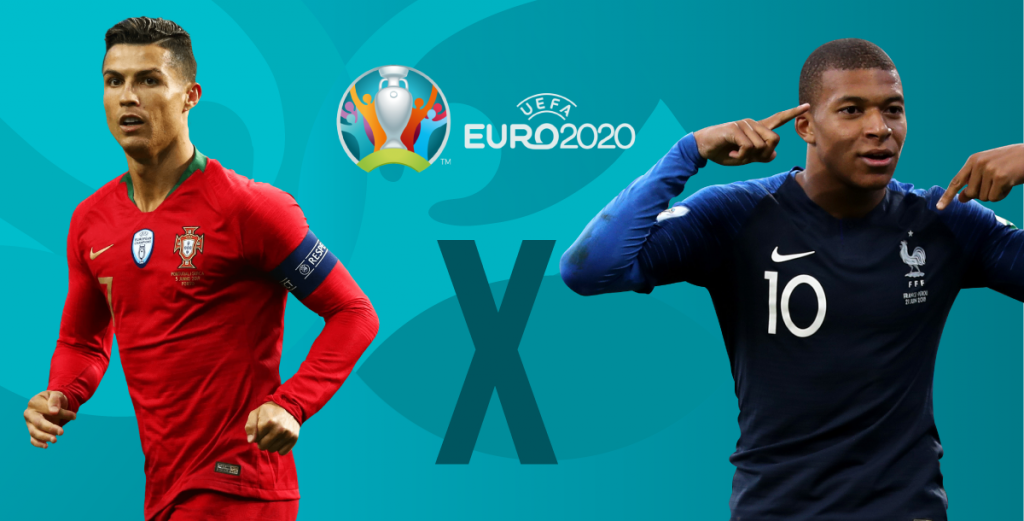 The game represents one of the biggest clashes in European football and our betting tips team predict it will finish with a France 2-1 win. Cristiano Ronaldo is the favourite to score for Portugal, but Kylian Mbappé and Antoine Greizmann will make the difference!

With qualification from Group F’s ‘Group of Death’ essentially on the line for both football teams on matchday 3 of this 2020 UEFA European Championships, Portugal vs France could not be a bigger game for both squads to be competing in on Wednesday 23 June at the Ferenc Puskás Stadium, Hungary.

Check our Portugal vs France betting tips below.

Betting On Euro 2020 Portugal vs France

Naturally, a game that features both national teams will always be incredibly competitive, however the stakes might have been raised after the two sides’ most recent results in this group.

Nonetheless, this will have only provided sports bettors with the best Euro 2020 betting opportunities possible, which is why EagleBet betting tips and top football predictions team are back to provide our readers with the best Portugal vs France betting tips that can be found when the two countries meet.

As mentioned, both football teams will be coming into this game of matchday 3 with qualification to the next stage of their Euro 2020 competition on the line, especially given what had happened in matchday 2.

Portugal started their tournament well against Hungary, but this was then followed up with a disappointing 4-2 defeat to Germany last week, with Cristiano Ronaldo unable to help his side take something from the game.

France would have been sure-fire favourites to overcome Hungary in their Euro 2020 matchday 2 game and would have been expected to have been heading into round 3 with qualification already secure.

However, Didier Deschamps side required a leveller in the second half from Antoine Griezmann after Attila Fiola put Hungary 1-0 up just before halftime.

France still top Group F with 4 points whereas Portugal have 3 and sit third, but with Germany on 3 and going up against Hungary, a win for them could make life incredibly difficult for those competing at the Ferenc Puskas Stadium.

Of course, with so much already on the line, there will be a number of great Euro 2020 betting opportunities for Portugal vs France bettors, which is why our EagleBet team have provided the best Euro 2020 betting tips that they can for this upcoming match.

Last Matches Between Both Teams

Those that are looking to get involved in Portugal vs France betting ahead of this 2020 UEFA European Championships round 3 match might want to look at the previous meetings between the two sides before they look to make a Euro 2020 bet on the game.

The reading does not look too favourable for Portugal when looking at the past Portugal vs France encounters, with Les Bleus having essentially dominated proceedings whenever the two sides have met.

Of course, many will remember the 2016 UEFA European Championships Final in which Éder scored a late goal in extra time to give the Portuguese national football team the title, but prior to that, the last time a win was achieved was back in 1975.

France Is The Favourite Against Portugal

These records suggest that France has to be considered the favourite and that’s the most obvious Portugal vs France betting tips for this Euro 2020 matchday 3 game.

It would be wrong to count out Portugal, though, when thinking about whether they have a chance of causing an upset against the France national football team, with Cristiano Ronaldo always a favourite to be able to find the back of the net.

Of course, the captain of the country has already managed to score 3 goals so far and remains at the top of the UEFA European Championship 2020 top goalscorer leaderboard, therefore making him impossible to ignore as a top Euro 2020 Portugal vs France betting tip.

France have only been able to score two goals this summer and this will have been considered a real surprise as they are considered to be one of the main outrights betting favourites to win the Euro 2020 Championships.

Kylian Mbappé has failed to register his goal account so far, despite having been a pre-tournament favourite to be a Euro 2020 Golden Boot winner, whilst Griezmann is the only one to have scored so far (an own goal helped them to the win against Germany in matchday 1).

When thinking about the best score prediction that our EagleBet betting tips and predictions team can offer, a result that sees France win 2-1 would have to be considered the best.

Both teams naturally have a number of great players within their squads, but with previous encounters all appearing to favour the French, whilst they will want to seek revenge for their 2016 UEFA European Championships Final defeat as well, it would be too difficult to overlook them.

Expect Cristiano Ronaldo to have an impact and get on the scoresheet for Portugal once again, but Kylian Mbappé and Antoine Greizmann could both have the clinical edge and get the goals for France when the two sides meet on Wednesday 23 June at the Ferenc Puskas Stadium in Hungary.

For more predictions, check out all of the EagleBet Euro 2020 betting tips articles now and claim some of the best betting bonuses available.