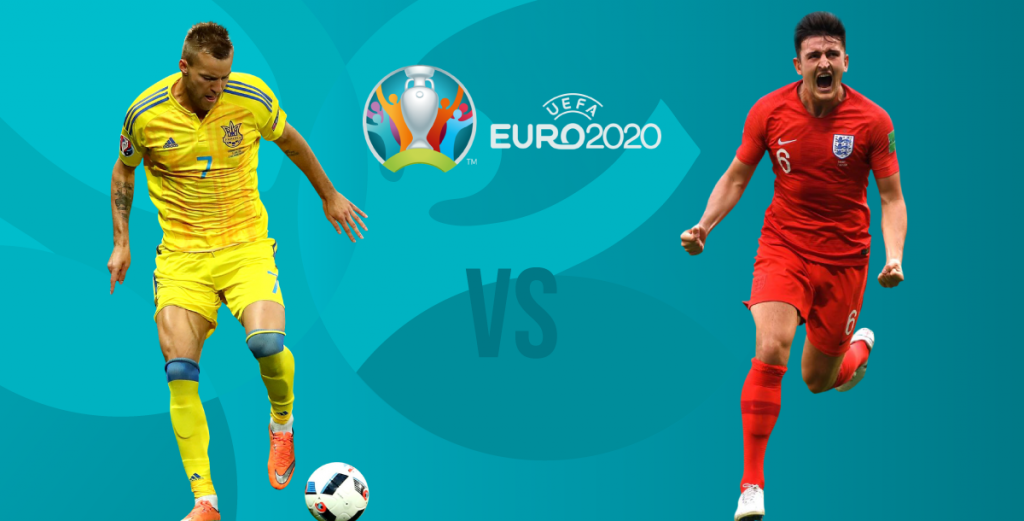 England to win 2-0 is the best Ukraine x England betting tip EagleBet can provide ahead of this Euro 2020 Quarter-Finals match, with Raheem Sterling and Harry Kane scoring. Check out more Euro 2020 betting tips below!

A place in the 2020 UEFA European Championships’ Semi-Finals are up for grabs as both Ukraine and England will compete in one of the standout ties of the Quarter-Finals stage. Both teams have played well to get to this stage of the competition, but this match is the biggest one so far with everything on the line.

Check out all of our UEFA Euro 2020 quarter-finals betting tips and predictions below!

Betting On Euro 2020 Ukraine vs England

With the match set to take place at the Stadio Olimpico, Italy, this match represents something different for both sides as neither of the two teams are yet to play at the venue in this current football tournament.

Indeed, the Three Lions have been able to play every game so far at Wembley Stadium, whilst the Ukraine national football team have been playing their fixtures in various stadiums around the continent.

Regardless of this, the quarter-finals Ukraine vs England game promises to be one of the best available in the Semi-Finals stage of the competition, with the best Euro 2020 betting opportunities thus far available to EagleBet readers who trust the betting tips and predictions our team continue to provide throughout the duration of this football tournament.

Both teams have had varying degrees of success in the current Euro 2020 competition, with England having arguably performed better than their counterparts to this stage of the competition.

Led by Gareth Southgate, the Three Lions managed to win their group stage without suffering defeat, whilst they surprised many as they were comfortable winners against Germany in the Round of 16, as Raheem Sterling and Harry Kane both netted on the day in front of a home crowd at Wembley Stadium.

Andriy Shevchenko’s Ukraine side have had to bide their luck a little, after finishing third in a group that contained The Netherlands, North Macedonia and Austria and ranked as the lowest nation in the tournament with that position as they managed to achieve just 3 points.

However, the country certainly rallied with each other when at Hampden Park as they managed to defeat Sweden in extra time with a 1-2 victory in a game that had plenty of drama, including Artem Dovbyk’s last-minute winning header.

Last Matches Between Both Football Teams

Betting on Euro 2020 quarter-finals Ukraine vs England could be a rather great market for many EagleBet readers, with England the overwhelming favourites going into this game and as an Euro 2020 outright winner for the entire tournament.

However, it should be noted that there have not been too many games between these two sides in the past which doesn’t help much to write a few betting tips. As expected, England have won the vast majority of the meetings between the two football nations, but Ukraine have sprung a surprise in the past, having won 1 and drawn 2 of the 7 total meetings to date.

The betting tips team, though, are predicting that England continue to improve their overall head-to-head record and record a comfortable win as they progress from this Euro 2020 Quarter-Final tie at the Stadio Olimpico on Saturday evening.

Ukraine have shown that they do not find it typically difficult when in front of goal to score, as they have only failed to score in just one of their four games so far (their 1-0 defeat to Austria).

In fact, the football team have managed to score a total of 6 goals thus far in Euro 2020, thus making them a potential goal threat.

A good Euro 2020 Ukraine vs England betting tips would be to think about Ukraine scoring a goal, with Andriy Yarmolenko and Roman Yaremchuk having both netted two goals each so far in the competition.

The only problem that they may find is that they come up against an England side yet to concede a goal; the only team in the competition with that record.

England might have been defensively solid, but there are questions about their star-studded attack, as they have been far from effective at times.

Raheem Sterling is going to be the best Ukraine vs England betting tip that can be provided, as the Manchester City winger has managed to score three of the four goals scored thus far, whilst Harry Kane has the other one.

Indeed, our best betting prediction would be to see both of those players on the scoresheet once again.

With that in mind, our betting tips and prediction team would not be surprised if a scoreline of England winning 2-0 were to happen, with both Raheem Sterling and Harry Kane to score once again.

Of course, Ukraine has talented attackers, but with England’s solid defence, it will likely be a tough night for Yaremchuk and Yarmolenko. One betting tip would be to predict that England will keep a clean sheet.

If you are looking to find more like this Euro 2020 Ukraine vs England predictions, check out all of the EagleBet European Championship 2020 betting tips articles now and claim some of the best betting bonuses available.