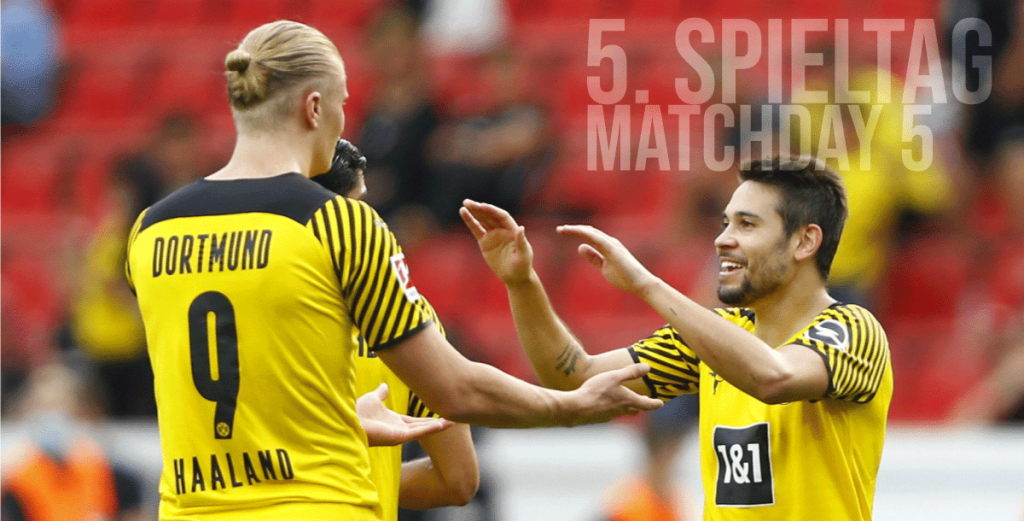 Round 5 of the 2021/22 Bundesliga season gets underway this weekend with some interesting clashes to look forward to from a betting perspective.
Wolfsburg remains at the head of the standings after the first 4 Match-days with a 2 point lead over defending champions Bayern Munich.

According to our Bundesliga betting tips experts Augsburg has remained in the drop-zone since the start of the campaign having failed to pick up a win as yet. They are also the lowest scorers in the Bundesliga with just 1 goal in the opening 4 matches.

However, M’Gladbach has also made a mediocre start to the season having earned only 1 victory thus far. Nevertheless, they are massively bankable to get a result in this encounter on the back of a confidence win boosting last week.

The 1.80 offer for an away-win looks a real gimme since Augsburg has lost both their home-games conceding 4 goals in each one. While ‘Gladbach may not bag as many as that, they should at least score a couple of times in this match.
But despite having Yann Sommer in superb form ‘Gladbach does not have a clean-sheet till now, presenting Augsburg a good chance to nick a rare goal. Therefore the 2.30 price for 2 or 3 goals in the game is another one that is too good to be missed.

This match presents some intriguing opportunities for the punters although it is a much closer contest than what the odds would suggest.

Mainz 05 has begun the season in remarkable fashion by winning 3 of their first 4 fixtures and keeping a clean-sheet in each of those victories to presently occupy a top-4 spot. Freiburg has also started impressively to be in 5th position after remaining undefeated through the opening 4 matches.

Interestingly, both Mainz and Freiburg have scored 6 goals thus far with 4 of them coming within the opening 45 minutes for both sides. Therefore the 2.75 offer for over 1.5 goals in the 1st Half becomes a really attractive option.
With so little to separate the two teams, the 3.60 price for a draw is the result that looks most likely outcome. However, Freiburg has scored 3 goals in the first 10 minutes so a 4.33 line for an early-goal is a good exploratory bet.

The bookmakers are backing RB Leipzig heavily to win this clash against a confident team in Köln, who thrive playing in front of their raucous home-support.

By their standards, Köln has made an excellent start to the Bundesliga campaign by taking 7 points off the first 4 fixtures. In contrast, Leipzig lie 5 spots below in 12th place after earning just 1 win and suffering 3 defeats from their opening 4 fixtures.

Their famed attacking style of football has produced just 5 goals so far and they have lost both their away-matches without finding the net. Adding to their troubles will be the extra exertions from the Champions League tie away at Manchester City which ended in another big defeat.

Leipzig does not possess a particularly big squad of players while Köln will have a full week to prepare for this fixture. Moreover, Köln has won both their home-games so far despite failing to keep a clean-sheet, so sticking with them for a result looks an astute choice.

For those willing to take a lesser risk can definitely go for a home-win at 2.10 on the +1 Handicap-line. Despite having some hard times in the recent past, Köln has never lost to Leipzig in 4 past meetings at the RheinEnergie Stadion.
Favouring the home-side to win at least one half at a price of 2.37 also appears to be a neat choice for this match.

EagleBet Betting Tips:
Anytime Goal Scorer: Dominik Szoboszlai at 3.25 with bet365
Result & Both Teams to Score: Köln at 7.00 with bet365

After a dominant victory over Barcelona in Europe, Bayern is expected to pick up another routine home-win in the Bundesliga. And so they should as Bochum has only won 1 and lost 3 of their 4 fixtures since making a return to the top-division.

Not much of interest for the bettors here, but there are still a handful of good lines to go for.

Odds of 1.60 for Bayern to win both halves looks a sure bet considering how authoritative Bayern can be at the Allianz Arena. Bochum will have a lot of desperate defending to do so the 2.62 price for the home-team to win a penalty also seems a pretty good shout.

Bayern will want to provide some rest to a few players ahead of a busy schedule, therefore one of the substitutes could nick a late goal as well.

Wolfsburg retained its early lead at the top of the Bundesliga after bagging 4 successive wins to start the season. While they have only managed to score 6 times thus far, their success is built upon the reliable defence which has let in just 1 goal.

Meanwhile, their weekend’s opponents, Eintracht Frankfurt has scored even fewer goals than them. Hence, going for the 2.10 offer for under 2.5 total goals is a very attractive choice to say the least.

Eintracht is hovering just above the relegation-zone as they are still searching for their first win of the campaign.
The Eagles have only managed 3 draws since losing heavily to Borussia Dortmund in the opening-week.
And with odds of 1.80, opting for a Wolfsburg victory seems a fairly straightforward choice for this encounter.