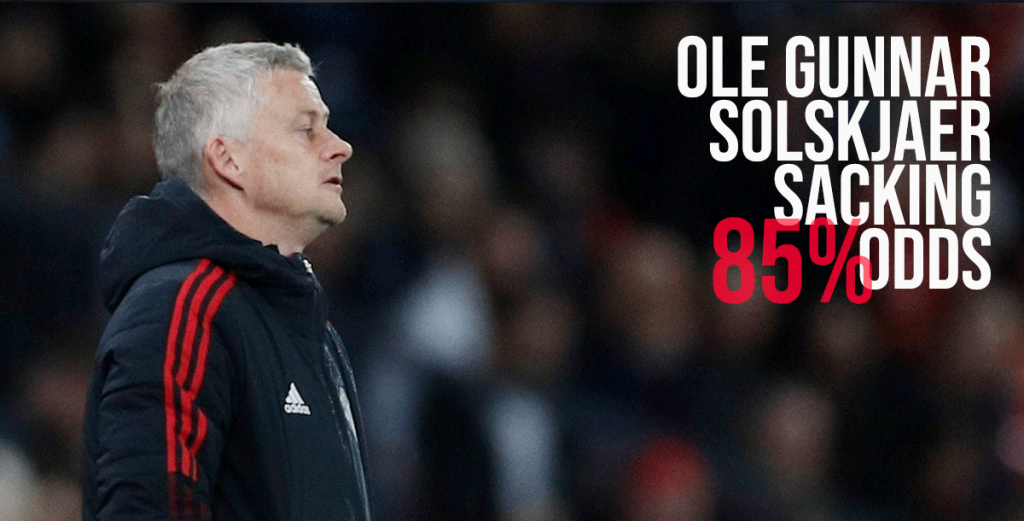 Ole Gunnar Solskjaer has moved way out in front in EagleBet’s Premier League sack race with huge money being bet on his departure and on his successor. This follows Liverpool’s 5-0 defeat of Ole’s Man Utd on Sunday, and the inevitable sacking of previous leader in the sack race, Steve Bruce at Newcastle. We also look at favourites to replace Solskjaer should the United board act. The Premier League sack race: the only race no one wants to win, except you the punter!

Conte Hot Favourite to be next Manchester Utd Manager

Former Chelsea manager Antonio Conte is first (1.73). Mauricio Pochettino is unlikely to be interested (however excellent) so his odds have drifted to 12.

Leicester City manager Brendan Rodgers is the second favourite at 7 and would be EagleBet’s candidate. United tend to avoid superstar managers, though there have been exceptions such as Jose Mourinho.

Real Madrid’s legend, Zinedine Zidane’s odds have gone from from 12 to 10. Since United’s humiliating defeat, 40% of bets on who will replace the still amazingly popular former Norwegian striker have been on the Real Madrid legend.

Rodgers was thought to be waiting for the Manchester City job. Anyone taking over will fear for the challenge – and their reputation.

Unsurprisingly star striker Cristiano Ronaldo has entered the market at 20, but given that he is all about Ronaldo and at Juventus was divisive in the dressing room, this would be crazy.

Some names are even more outlandish. Ralph Hassenhuttl (33) is struggling at Southampton and Nuno Espirito Santo (40) struggling at Spurs, so the Eagle sees nothing to suggest they could manage a club like Manchester United at this stage in their careers.

Every bookmaker now has Solskjaer at odds-on to leave next. Paddy Power have him as short as 1.20.

That would equate to an 85% chance that Solskjaer will be the next Premier League manager to “win” the managerial sack race.

Given that Bruce has gone, and even Southampton looked a bit better at the weekend, it is hard to argue with those odds.

Odds on Next Man Utd Manager

Which Other Premier League Manager is at Risk?

Amazingly, Watford’s Claudio Ranieri is the new short price second favourite to be sacked next at 4/1. Crazy, emotional and short-termist as Watford’s board is, we can’t see this. He is a great manager –too good for Watford’s board! – and his triumph at Everton shows he is getting Watford working. All as EagleBet predicted.

Next up is Norwich’s Daniel Farke at 6.50. Until the Canaries were eaten alive 7-0 by Chelsea at the weekend we would have laughed as Norwich are privately fairly resigned to relegation, plus they are not a sacking club. But their complete lack of fight against Chelsea might get the board thinking. But they will also know its going to be almost impossible for anyone to turn round Norwich’s season and Farke has proved he can win the Championship with ease.

Hassenhuttl has bought himself a few more weeks at Southampton.

Ole’s only other rival candidate to be sacked as a Premier League manager now would be his weekend opponent, Nuno Espirito Santo: Spurs are looking poor. That said, he is the kind of manager you appoint for the long-term. We can’t see Spurs pulling the trigger so soon into his Tottenham career.

But the shortest surviving Premier League manager was at Spurs, Christian Goss – incredibly, he lasted just three games. The full list can be seen here in our earlier article.

There are always new welcome bonuses at Eagle. So why use your own cash? Use effectively free bets to sign up with a bookie you don’t have an account with. Just look at the great selection of bookies we have negotiated special deals with to give you the best welcome bonus.