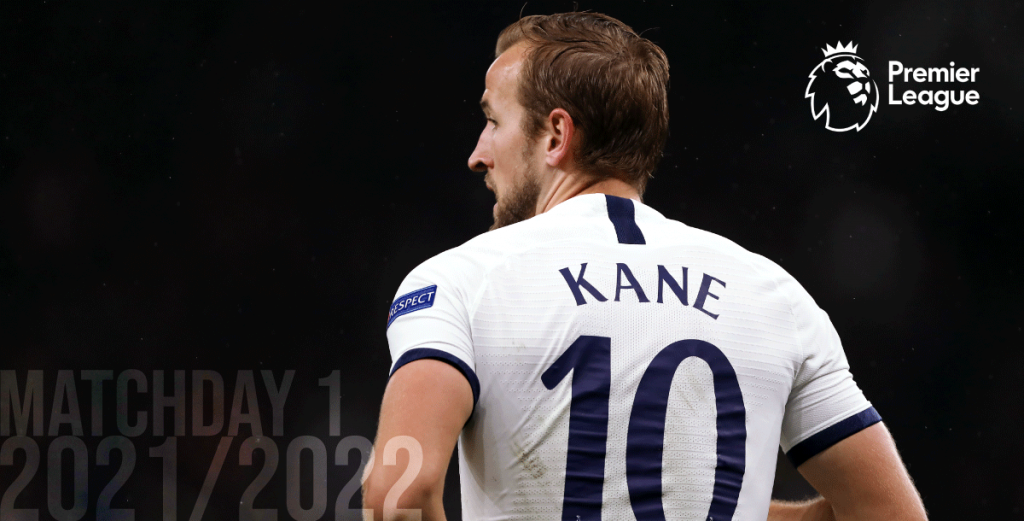 The English Premier League 2021/2022 kicks off again on the 13th August and already there are some popular bets emerging with plenty of value in the market for the first fixtures of the season to be played.

Bettors Beware: This Weekend Is Different

There are loads of Premier League markets for the season as a whole, covered in EagleBet’s most comprehensive Premiership predictions for the 2021/2 season.

This article will focus purely on the odds, tips, predictions and news about the opening weekend fixtures before such guides have been published by our so-called rivals – giving you our customer the edge when looking for a good bet on those Premier League fixtures.

The match of the day in the Premiership is surely Tottenham v Manchester City, with the big question being who – if anyone – will Harry Kane play for. He failed to turn up for the first day of training at Spurs as England’s star striker tries to engineer a move to Manchester City.

Fans Are Back To Premier League Stadiums In Matchday 1

Two quick things to consider before you bet on the Premier League 2021/22 for the opening day matches: firstly remember they will be played once more in front of crowds, which is likely to favour the home team (unless it is really struggling and the crowd turns against it) following a period of playing behind closed doors. As such expect to see more home wins than last season.

Secondly, the opening fixtures are always unpredictable and the bigger clubs might only have had their star players back for a week or two prior to the season as they were given extended holidays following the Euros. Therefore, this could be the weekend to risk a bet on an outsider, so expect (and bet on) an upset or two.

Brentford are a well-run club and we see them as a bit more than the relegation fodder predicted by most bookies. We can’t quite see them beating Arsenal in this new London derby but we predict Brentford v Arsenal being a score draw.

For Manchester United v Leeds United, the EagleBet panel thinks the odds the bookies are offering on Leeds are generous: they are a better team than that, particularly given the recent covid outbreak in the Man U camp and their uneven pre-season form. Nevertheless we just have to predict Manchester United to beat Leeds.

At 5/2, Burnley looks good to beat Brighton at home. Well worth a bet on Burnley we think, and this is one of our hot tips for the opening weekend fixtures of the Premier League.

With a new manager and a number of problems Palace could really have done with avoiding a team as strong as Chelsea the first game of the season. Not great odds but Chelsea are a near certainty to win this one at home, our expert panel believe, hence we tip Chelsea.

For Everton v Southampton, it is hard to see anything but a home win. Therefore, our tip is Everton if you fancy a bet on this one.

Watford v Aston Villa is a hard one to predict and it could be very close. But Villa are looking more like losing starman Jack Grealish, which will unsettle them. Home advantage could just see Watford hold on for a draw, which looks a good bet to us at 5/2: there is value in this bet, we predict.

If you want to take a punt on something with long odds, how about Norwich, either for a home win (they are at an incredible 9/1) or at least a draw (5/1)?

Yes we know Liverpool are hot favourites and no one should be surprised if the Reds win this quite comfortably, but we doubt a manager as wise as Jurgen Klopp sees this match as being quite as one-sided as the bookies seem to. As we say, it’s the first game of the season, and if there is ever going to be an upset, why not this weekend and in this match?
The EagleBet prediction panel are, we can reveal, tipping West Ham to win away at Newcastle in the opening game of the season.

As for the big match, Spurs v Manchester City, clearly City are favourites and that is who we are predicting for the win. However, do think about betting on the draw which looks quite tempting value at 7/2.

Who Should I Bet With

Follow one of our links to get your improved welcome bonus and top quality customer care.

Then use our Premier League guide (both the long term one for the season and this one to the opening fixtures) to place your bet.

There is some good value in the market out there on the opening weekend – take advantage and soar with winners here at EagleBet.