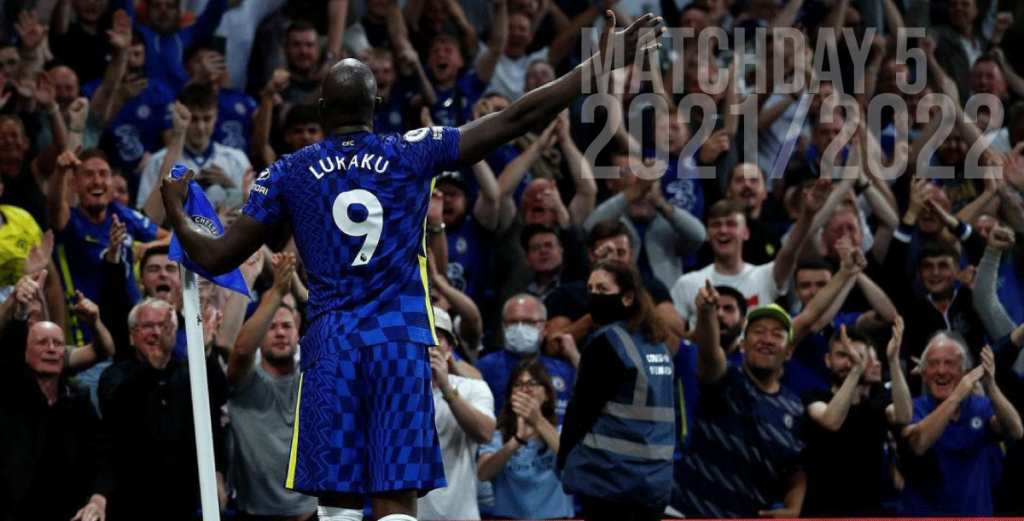 Welcome to the most comprehensive Premier League betting guide on the internet. Already the Premier League is starting to take shape with Ronaldo’s Manchester United top and Everton impressing, but there are still some great value bets to be had.

We have negotiated some nice new welcome bonuses with our betting partners so you can claim a bonus to bet on a busy matchday 5 in the Premier League using our Premiership predictions, odds and tips.

There are some great matches here with West Ham v Manchester United and Spurs v Chelsea being particular highlights. There are also plenty of betting opportunities with a draw at Premier League odds of 4 looking tempting in the West Ham v Man Utd game, and Everton look decent value for an away win at odds of 3.1

But there are plenty of other Premier League matches and special markets to consider betting on which we bring you below.

Both teams come into this off the back of heavy defeats and both are struggling more this season than predicted.
Newcastle lost 4-1 at Manchester United, Leeds lost 3-0 to Liverpool. Both could be explained as predictable defeats but the pressure will be on both to gain points from this more “bread and butter” encounter.

Callum Wilson could be missing again for Newcastle, along with Shelvey, Fraser and Dubravka.

For Leeds Pascal Struijk is definitely suspended and Robin Koch is injured.

Newcastle drew their last two away games and Leeds also drew their previous away game at Burnley. Leeds have slightly underperformed this season but can step up a gear whereas Newcastle are troubled. However, home advantage before their passionate – though increasingly disgruntled – fans might be enough to get Newcastle the draw.

EagleBet tip: Bet on a draw. Also think about Patrick Bamford for first goalscorer at odds of 5. We thought about over 3.5 goals at odds of around 2.6 as there could be plenty of goals in this one given both have leaky defences. However, without Wilson out we are not sure Newcastle will contribute enough goals to justify that.

An intriguing match, this, with Wolves improving fast and Brentford on the back of their first defeat since returning to the top flight for the first season there since 1947. Wolves attack with drive; Brentford defend with poise.

Gunnarson, Sorensen, and Dasilva are all out for the Bees following their sobering 1-0 loss to Brighton.

Confidence for Wolves will be higher after their 2-0 win over Watford while they were unlucky to lose 1-0 to United the week before. Summer signing Hee-Chan Hwang could start after scoring on his debut. Jonny and Neto are injured.
Almost half the bets are going on a home win but we don’t see any value in that bet at these odds.

EagleBet tip: We think the draw is by far the best value bet here though we would not be amazed by a Wolves win. We expect this to be a low scoring, cagey affair with two very resilient defences but the “under goals” market is not attractive. We quite like to predict the score option of 1-0 to Wolves which you can get at odds of 6.

The odds on Arsenal to win away are crazily short. They might have won last time out but that was home to the division’s weakest team, Norwich, after three successive defeats. Arsenal remains in trouble and it will take more wins from them before we consider a bet on them to win away to anyone in this division at odds of 2 or even lower with some operators.

Granit Xhaka is banned for Arsenal, while Mohamed Elneny is still injured. More positively, former Brighton centre half Ben White gave the re-assuring performance anchoring the defence that Arsenal have been crying out for.
Burnley are struggling and haven’t won at home yet this season, hence their long odds.

Burnley are without Stephens, Roberts, and Long and have just one point so far, seeing them dip into the bottom three.

EagleBet tip: A draw looks much more attractive odds to us than an Arsenal win. Its not great odds but seeing as neither team have managed to score more than one goal in a game so far this season, the under 2.5 goals is worth thinking about, but odds are only around 1.8.

Jurgen Klopp’s Liverpool are doing nicely and are hot favourites to beat Crystal Palace, which is reflected in the odds.
However, Palace under Patrick Viera are doing far better than many predicted and knocked Spurs off top spot last time with a shock 3-0 win. Liverpool will also be without Firmino, Minamino and of course Elliot who has just undergone surgery after that horror tackle.

Mohamed Salah is doing what he does – scoring goals, with three so far this season. The Eagles secured an impressive 2-2 draw at West Ham in their last away match but Liverpool are a much harder opponent.

EagleBet tip: No value in the home win bet. Half the bets are going on either a Palace win or a draw, which just shows some people have a lot of money to risk. Salah is favourite to score first at odds of 4 but there are so many potential Liverpool goalscorers it would be a risky bet. There is also little value in the under/over goals market.

Another very straightforward match to predict and very little value in the main markets here with City looking to hit top spot.

Southampton are the division’s draw specialists and half the bets have gone on a draw for this match, and although the odds might look tempting at 9, City are just so good we would not risk it. The great Kevin de Bruyne is fit while Southampton have injuries, including to Theo Walcott.

EagleBet tip: very little value in this match. Manchester City have hit five goals twice this season and you can get odds of 5 for over 4.5 goals for City, but only worth a very small bet.

A more interesting one between two of the promoted clubs. There might not be too many matches this season where the bookmakers list the Canaries as favourites this season but the home side has the shortest odds here by some distance.

That might seem strange when you see that Norwich have lost all four league games so far this season with 11 goals against and just one goal for. But they have had a tough start including matches against Manchester City and Liverpool.

Watford lost 2-0 to Wolves last time out and are not enjoying a great season yet themselves.
EagleBet Premier League Matchday 5 prediction: draw

EagleBet tip: both teams are weak so it is a difficult match to assess but we just don’t see great value in Norwich given their form at these odds. The draw, by contrast, looks a better value bet. Both teams struggle to score (Norwich average just 0.25 goals per game, Watford 0.75) so given there is a reasonably high chance that there will be either zero goals or just one goal in this game, the under 1.5 goals bet at odds of around 3.2 is tempting. Pukki as first scorer could be an option at odds of 5 on the basis that there will be a lot of players out there who will have forgotten even where the net is.

This should be a highly entertaining match with Rafa Benitez working wonders with a Championship style transfer budget.

The Toffees find themselves at the unusual heights of 4th place in the Premier League and unbeaten, though their victories have come against Southampton, Brighton, and Burnley along with a decent point at Leeds. Everton’s form stretches from last season: they have lost only two of their last 17 Premier League away games – 10 wins, five draws – and the defeats almost don’t count seeing as they came against Chelsea and City last season.

However, Everton will miss Calvert-Lewin (injured) so Brazil international Richarlison will lead the attack.

As for Villa, they are missing Jack Grealish since his transfer to City. While you can’t read too much into their 3-0 Premier League defeat to Chelsea last time. Their once very solid defence is now looking a bit shaky, having kept only two clean sheets in their last 16 games. Their only home win this season in the League was against Newcastle, and almost everyone is beating the poor old Geordies at the moment.

We don’t read much into these stats but Villa have enjoyed 20 wins to 13 for Everton in these Premier League fixtures.
EagleBet Premier League Matchday 5 prediction: draw or away win (only factor which makes us hesitate over an Everton is the absence of Calvert-Lewin’s absence.)

EagleBet betting tip: Over 1.5 goals for Everton at 2.62 is perhaps worth considering given Villa’s poor defence and Everton’s good form on the road. The odds are not great but you can also get over 2.5 goals – which seems pretty likely as there are goals in both teams – at odds of around 2

As stated we think West Ham are in with a chance of holding out for a draw against Manchester United, and certainly don’t see much value in the Red Devils at odds of around 1.7.

You can get Ronaldo as first goalscorer incidentally for around 3.75 or perhaps 4.

As for Brighton finding themselves in 6th, their great start to the season must be even more of a surprise to neutrals than Everton’s. But there is clearly a great team spirit and work rate that makes Brighton more than the sum of its parts.

Leicester will have faced Europa League competition in the week whereas Brighton will be rested.

Our prediction is a home win here and at decent odds our Premier League tip is that this is worth a bet. Both teams should also score.

Finally, the big London derby on Sunday sees Spurs trying to recover from the 3-0 loss to Palace. But Chelsea will be a seriously tough encounter, particularly if Son is injured.

We predict Chelsea will be too strong but are not tempted at those odds. With both teams boasting attacking options over 2.5 goals at odds of 2 might be worth a bet.

Lukaku is at odds of 4 for the first goal; Kane is back at odds of 6.

Use a Welcome Bonus to Bet on the Premier League

Use one of our welcome bonuses in the Sportsbook of one of our partners if you haven’t yet – we are loving Zodiac, a new partner, or Neo.bet – and use one of our many Premier League Matchday 5 betting tips and predictions to claim your free bonus and bet.

Good luck in Matchday 5 of the Premier League – and soar with winners here at EagleBet by coming back during the week to catch our latest odds and predictions.