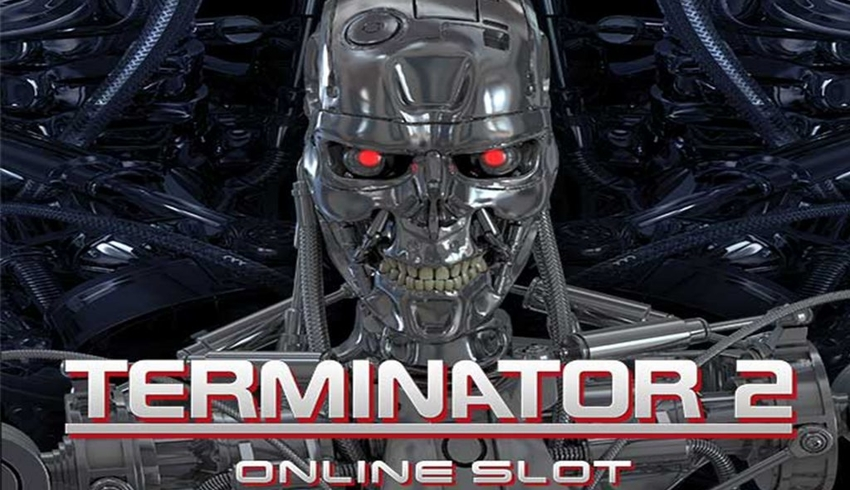 The Terminator will certainly be back as Microgaming have remastered their Terminator 2 slot game to enable this action-packed video slot to be played on mobile devices whilst containing all of the best bonus features!

This Terminator 2 slot game manages to provide players with the same themes from the hit movie franchise whilst the inclusion of some great animations and an outstanding soundtrack certainly make for a nice touch!

Whilst the Terminator 2 slot game is played across a background that provides a feeling of robotics at play, there are a number of symbols on the paytable of this video slot that certainly help to take the theme to another level.

The Terminator 2 slot game’s low paying icons continue to include the playing card suits of hearts, clubs, diamonds and spades, however, these are then followed by a number of the characters that appear in the Terminator movie franchise.

The first to appear is the full robot version of the Terminator (T-800) and is then followed by Sarah Connor and the bad guy, T-1000. John Connor and the humanoid version of the Terminator round off the game’s regular icons on the slot game’s paytable, with the latter of the icons providing a reward of 26.66x the stake when five appear on a pay line!

The T2 logo represents this Terminator 2 slot game’s Wild and has the power to substitute for all regular icons, whilst also providing 100x the stake when five appear on the reels across a pay line.

This Microgaming Terminator 2 video slot comes with 5 reels and 3 positions in which the aforementioned icons can appear. There are 30 fixed pay lines for them to form winning combinations on as well in this online slot.

Bets can be placed from as low as €0.30 per spin, whilst bettors who prefer to place larger wagers when they play slot games can place up to €30 per spin, thus providing something for players with all budgets.

In regards to the online gameplay experience, Microgaming has made this Terminator 2 slot game as easy as possible to play whilst also introducing a number of buttons that will allow for the video slot game to be customised. These include the ‘Autoplay’ function whilst there is also the ability to adjust the bet being placed.

The return to player (RTP) rate for this Terminator 2 slot game is a reasonable 96.62%. The video slot can provide players with some great rewards as the volatility level is set to be at a medium to high level.

Having not originally been made for mobile play, the Terminator has finally come back for slot players that are fans of this franchise as Microgaming have remastered the game with the HTML5 technology that allows for it to be played on a smartphone and tablet device wherever bettors desire.

There are three bonus features in this Terminator 2 slot game that will surely have players excited and want them to start spinning the reels from their smartphones/tablets as soon as possible!

The first of the bonus features of the Terminator 2 slot game is the ‘T-800 Vision’ game, which is triggered randomly following a spin that does not provide a winning combination. If the game is activated, just one Scatter icon appearing will trigger the ‘Free Spins’ round. Three or more of the Scatters are normally needed in the base game, though. The ‘T-800 Vision’ game will also see a cash prize awarded for the appearance of any character symbols as well.

The ‘Free Spins’ feature will see the number of win ways be increased from 243 to 1,024. Players will receive 10 free spins to begin this feature, and the T-1000 icon will be able to transform into any other character available on the paytable.

In addition, there is also a ‘Hot Mode’ version of the Terminator 2 free spins game. This is triggered when flames appear around the “10 free spins” message and will provide players with reels that have been enhanced to produce bigger wins. This feature is rather rare, though.

Arnold Schwarzenegger told us that the Terminator would be back and Microgaming has certainly made sure he would be with their remastered Terminator 2 online slot game. Indeed, whilst the addition of the HTML5 technology is a great touch for players of mobile devices, the bonus features available certainly make this video slot one to play!

If you enjoyed the movie and you’re a fan of online slots, then Terminator 2 by Microgaming is a win-win. Play the remastered version of the slot here at EagleBet.