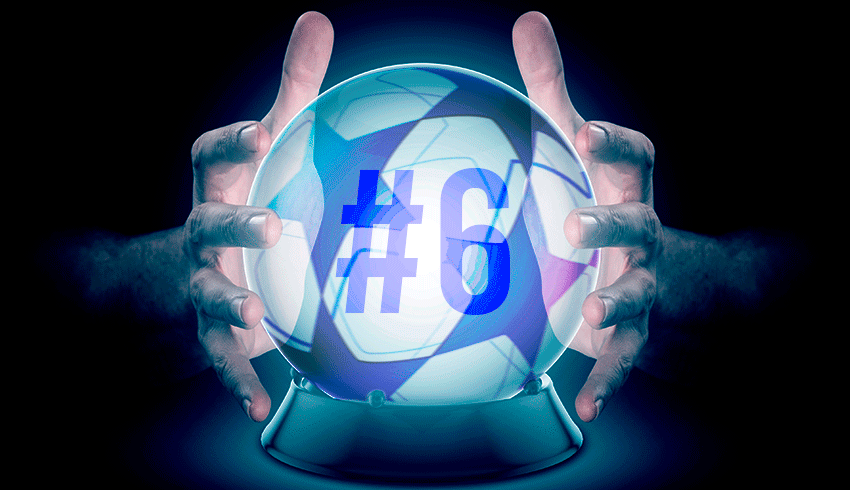 The final round of 20/21 UEFA Champions League Group Stage matches is finally upon us as a number of football teams still have plenty to play for on Matchday 6.

As this particular set of fixtures have some serious implications on the European adventures teams have in the UEFA competition, EagleBet Sportsbook is the number one resource for those looking to find the best 2020/21 UCL Matchday 6 predictions.

However, there are still seven places up for grabs and those will be decided in the UCL Matchday 6 of the competition. Atlético Madrid requires a point from their next match to seal their own qualification, whilst Manchester United, Paris Saint-Germain and RB Leipzig are going into the final game with one going to have to settle for a 20/21 UEFA Europa League place instead of following the Christmas break.

Inter Milan and Real Madrid both face the prospect of being knocked out of the 20/21 Champions League Group Stage if they fail to win and have the other result go their way, which makes Group B one to watch when the Matchday 6 fixtures are played.

These are the 20 matches to be played in UCL 20/21 matchday 6 this week, which includes a potential showdown between Lionel Messi and Cristiano Ronaldo:

As mentioned, there are still plenty of outcomes riding with Matchday 6 of the 20/21 UCL still left to be played, thus making it an extremely great round of fixtures for those that fancy having a bet on the action.

EagleBet Sportsbook has got bettors covered, though, as they provide punters with a vast majority of markets and some of the best UEFA Champions League odds have been made available across the whole industry.

With a number of football teams going to have to go out and attack from the first whistle in the hope of achieving the qualification, it would be wise to consider how many goals will be scored when making 20/21 UCL Matchday 6 predictions for the upcoming games.

These are just some of the predictions that we think could happen in the 20/21 Champions League games that potentially offer the most excitement and potential in regards to betting.

Both football teams know that a positive result in this 20/21 Champions League Matchday 6 fixture will help them progress, however, Club Brugge need a win, whereas SS Lazio can just grab a point from their home contest. Their Matchday 2 encounter in Belgium finished in a draw and it would not be a surprise if this meeting finished in the same fashion. Although EagleBet Sportsbook favours an Italian win, betting on a 1-1 draw could prove fruitful. Ciro Immobile has been in decent scoring form in the 20/21 UEFA Champions League, so expect him to get the Italian’s goal.

A high scoring affair could be on the cards when RB Leipzig and Manchester United meet in Germany for their 2020/21 UCL Matchday 6 meeting. However, each football team will likely balance each other out as both have the same aim: needing a win to guarantee their spot in the knockout stages of the 20/21 Champions League.

The 5-0 win by the Premier League outfit last time at Old Trafford will not be replicated, although RB Leipzig have been conceding goals in an abundance recently, having also shipped three against Istanbul Basaksehir in Matchday 5 and needing a last-minute goal to get the three important points needed.

Expect players like Marcus Rashford and Yussuf Poulsen to get on the scoresheet as the odds for the 2-2 draw currently remain a little longer than they should for a game with so much riding on the final result.

So much is riding on this UCL game for Real Madrid, that it would not be a surprise if they manage to beat Borussia Monchengladbach. Their previous encounter ended 2-2 but with so much on the line for Los Blancos – and arguably Zinedine Zidane – the Spanish football team will need to come out firing from the first kick. Thus, betting on Real Madrid to win in this Champions League match and both teams to score – as the Bundesliga outfit has scored in every game since their 3-0 defeat to Borussia Dortmund in Matchday 1 of the Bundesliga across all competitions – should prove lucrative. Karim Benzema and Alassane Plea should both get on the scoresheet.

Check EagleBet Sportsbook for more top football sports betting tips and predictions with the Champions League edition of 20/21 being the main football tournament for all sports bettors.