You are here: Home »  Blog » The Secret Tipster: Bundesliga Odds, Betting Predictions & Tips For The Weekend 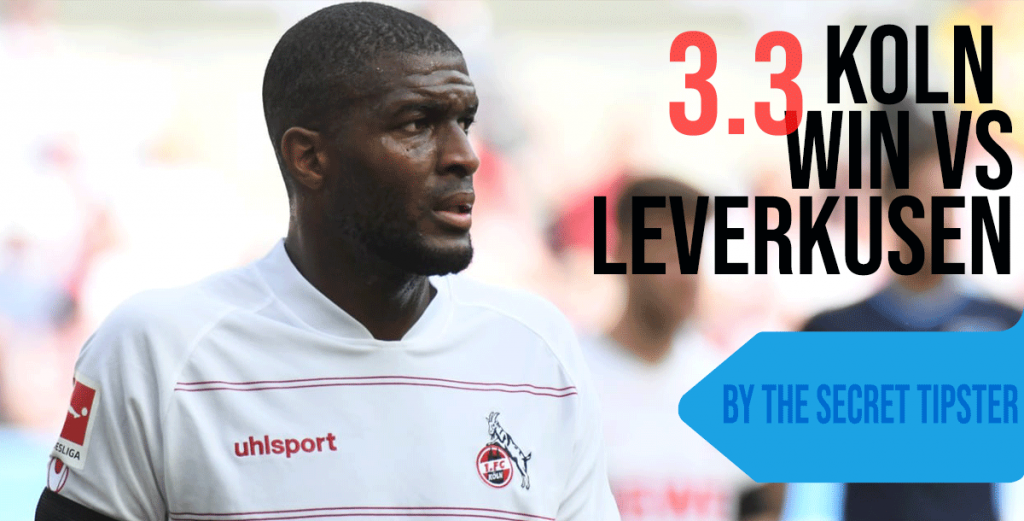 Made millions from betting online on the Bundesliga and Premier League. He sees the bets that the general punter misses. Having worked at the highest level of the industry he understands betting from both sides. Make money with The Secret Tipster by following his Bundesliga betting guide containing odds, predictions and tips in the Bundesliga this weekend.

See our Bundesliga and Premier League predictions in full, with each match analysed.

Any Bundesliga betting guide should look at how tired a team is likely to be, but it is rarely mentioned. The betting markets find it hard to assess this because it is an intangible factor that can’t really be statistically assessed.

But we can still analysis it to see where the value is in Bundesliga odds.

I break it down to two elements of likely tiredness. There is physical tiredness: how far has a team had to travel in midweek to play in the Champions League or Europa League and how many days have they had to recover? And there is mental tiredness: Have they travelled a long way and lost a game badly, or have they won easily against a team they weren’t expected to beat?

Clearly a team that has had to travel half way across Europe and then got beaten by four goals may not be in the best shape to perform at the weekend.

Leipzig and Leverkusen: the Tiredness Factor

Unusually, all four Bundesliga teams in the Champions League played away this week. Of those, only Bayern won, easily disposing of Benfica 4-0. Wolfsburg lost 3-1 to Austrian maestros Salzburg but the journey there is not that demanding so they may not be that physically tired. Likewise Dortmund lost 4-0 to Ajax but the travel is not a great distance. Leipzig lost 3-2 to PSG and although the distance isn’t that far, I expect playing one of the best sides in the world and going 2-1 up before losing will have taken its mental toll, especially given that Mbappe a missed penalty.

Of the Thursday games, both Leverkusen and Union Berlin played away, Leverkusen drawing 1-1 to Real Betis and Union losing 2-1 at Feyenoord. Of those two games, I suspect Bayer Leverkusen will be the most tired from their travels and in the abstract I would like to oppose them in the Bundesliga betting market.

Betting on the Asian Handicap Against Travelling Bundesliga Teams

There is an argument that a good Bundesliga bet would be against all sides that have travelled this week on the Asian handicap. I don’t actually think this would be the worst betting plan of all history. But I limit myself to two Bundesliga bets a week, so I am not going to officially advise that.

Leipzig host Greuner Furth, who have scored one Bundesliga point all season. On xG they “should” have 6.7 points, which suggests they have been unlucky this season.

Furth are not a terrible side and have actually not lost a Bundesliga game by more than two goals since August, including against Bayern Munich. Against a RB side that will have left a lot on the pitch against PSG, Furth can be backed with a 2.25 goal advantage on the Asian handicap at 2.00, which seems generous Bundesliga odds.

Working out how to oppose Bayer Leverkusen has been hard. On xG ratings they are the team that has most over-performed this season and they travel to Koln on Sunday to play a side that is surprisingly seventh in the Bundesliga and has scored plenty of goals. Koln are playing some attractive football and it feels like it is more on reputation that Leverkusen are at Bundesliga odds of 2.06 for the away win. I think the best way to play this is to split stakes and have a bet on Koln to win the match at 3.25 and have the other half on Koln +0.25 goals on the Asian handicap at 2.06.

I had hoped to find a Bundesliga bet in the Hertha Berlin game as I will be going to the match this weekend but Hertha’s defence is so abysmal it is hard to find an angle. Gladbach are probably slightly over-rated by the market but not by enough to force me to have an investment!

Claim a welcome bonus from one of our partners listed where you haven’t opened an account yet – and use predictions and the Secret Tipster’s Bundesliga betting guide with his tips and predictions to bet – and use the Asian handicap betting system.