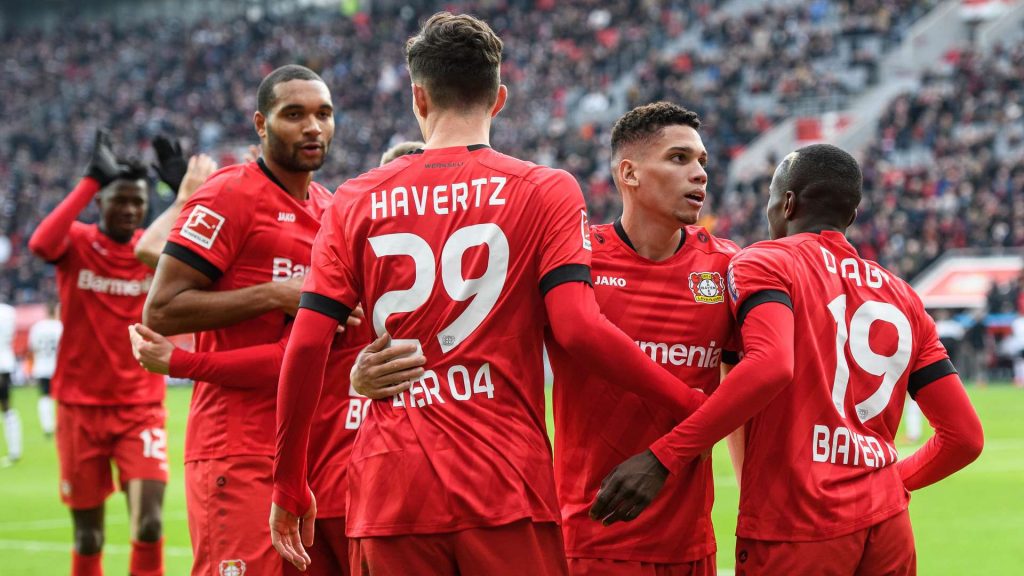 The men’s team plays in the 1.Bundesliga, which is the highest level of league football in the country.

The club was founded on 1st July 1904 by the employees of Bayer AG with support from the pharmaceutical company whose headquarters are in Leverkusen. It took the name ‘Turn- und Spielverein Bayer 04 Leverkusen’ and also included handball, boxing and gymnastics among other sports.

hile the gymnasts carried on as ‘TuS Bayer 04 Leverkusen’.
Throughout its early decades heading into the 1930s, SV Bayer 04 Leverkusen floated between the 3rd and 4th divisions of the football league structure. In the 1935/36 season it earned promotion to the 2nd division and while the team also wore the ‘Bayer cross’ on the jersey that same year.

After the end of World War II, Bayer 04 Leverkusen played its first top-flight league campaign in the 1951/52 season. The club could not earn a berth for the national championship but nevertheless finished its maiden season in the Oberliga West on a respectable 6th position.

Bayer Leverkusen remained in the top-tier for the next 3 years and even registered a 3rd place finish at the Oberliga West in 1954/55 narrowly missing out on qualifying for the German championship.

However, it dropped to 15th position in the following 1955/56 campaign and dropped back into the 2nd division once again.

The club returned to Oberliga West for the 1962/63 season, the last one before the top-division would be contracted into a new national league called Bundesliga featuring only the top teams of the last 10 years. Despite 5 spots being allotted to Oberliga West, Leverkusen did not make the cut and fell back into the 2nd division.

With the consolidation of the German league football structure, Bayer Leverkusen was now part of the new 2nd tier known as the Regionalliga. The competition was a lot more challenging, particularly in Regionalliga West and it failed to earn a spot in the promotion playoffs for the next 4 years.

SV Bayer Leverkusen enjoyed a breakthrough campaign in 1967/68 by winning the Regionalliga West although it failed to earn promotion after getting eliminated in the 1st round of the playoffs. In the 1973/74 season, the club dropped down to the 3rd tier once again but managed to get back up the following year.

The 2nd division was now known as the 2.Bundesliga which contained 2 separate leagues. Bayer Leverkusen was cast in the Nord division and finished the season just 2 points above the drop-zone in 15th spot. It enjoyed a slightly better campaign in 1976/77 to end in 10th position.

In 1977/78 Bayer Leverkusen took an 8th place finish in the league-table to continue its steady progress over the last couple of years. It then went on to clinch the 2.Bundesliga Nord title in 1978/79 to earn a direct promotion to its first top-flight season since the Bundesliga era started 15 years ago.

In 1979/80, Bayer Leverkusen survived its maiden 1.Bundesliga campaign finishing 3 points above the drop-zone in 12th position. But in the 1981/82 season the club ended inside the bottom-3 in 16th spot to head into the relegation-playoff. However it was able to overcome Offenbach Kickers 3-1 on aggregate to stay in the top-tier.

Leverkusen remained a mid-table side for the next few years but managed to finish in 6th spot on a couple occasions. In 1987/88, Bayer Leverkusen caused a major surprise by clinching the UEFA Cup, beating Spanish side RCD Español in the final to earn the first major trophy in its history.

In the 1989/90 season, Leverkusen completed its best campaign in 1.Bundesliga up to that point with a 5th place finish. It repeated the accomplishment in the 1992/93 before improving upon it by taking 3rd place at the end of the 1993/94 campaign, ending just 4 points behind champions FC Bayern.

The club remained inside the top-half of 1.Bundesliga until the 1995/96 campaign when it finished only 2 points above the relegation-spots in 16th position. Yet it emerged as a contender for the 1996/97 campaign but eventually lost out to Bayern by just 2 points to finish as runners-up for the first time.

Bayer Leverkusen remained inside the top-3 for the next couple of seasons even though it was not able to make a serious title-bid. In the 1999/2000 season, it finished level on points with Bayern München but lost the 1.Bundesliga on goal-difference to end as the runners-up for a 3rd time in the last 4 years.

The club picked up another top-4 finish in the following campaign before causing a massive stir in Europe in 2001/02 by reaching the UEFA Champions League final for the first time. Despite a good performance, Leverkusen lost the match 2-1 to Real Madrid CF courtesy of a legendary strike from Zinedine Zidane.

That season Bayer Leverkusen had finished as runners-up to Bayern München yet again but the following 2002/03 campaign was a huge disappointment as it barely avoided relegation and finished down in 15th spot. The team did bounce back by taking 3rd place in the 2003/04 campaign.

For the next 6 years, Leverkusen kept floating within the top-half of the league-table without coming close to challenging for the title. In 2010/11, it finished as runners-up for the 5th time although it had actually finished a good 7 points behind the champions BVB 09 Borussia Dortmund.

Bayer Leverkusen finished inside the top-5 positions of the 1.Bundesliga table for the next 5 seasons without proving to be title-contenders at any time. But in 2016/17, the club dropped out from the top-half and finished way down in 12th position and only 4 points above the bottom-3 teams.

Once again, the team responded swiftly and earned a 5th place finish in 2017/18 and moved up to take 4th position in the following campaign. Leverkusen stayed in the top-6 for the next two seasons before producing some sparkling form in 2021/22 to end the season in 3rd position.

While most German clubs proudly display its working-class roots, Bayer Leverkusen stands apart in this regard as it exudes a more dignified and urbane personality. The club strives to maintain a clean and family-oriented image while BayArena is regarded as the most family-friendly stadiums in the country.

Yet, it was the first team in the Bundesliga whose fans to use the term ‘Ultras’ to define their allegiance and Leverkusen is amongst the oldest industrial cities of the country. But rival fans often criticise it for lacking traditions and existing mainly due to the huge sponsorship from the pharmaceutical giant Bayer AG.

However, Bayer Leverkusen’s corporate links are similar to other European clubs like PSV, FC Carl Zeiss Jena and FC Sochaux. Unlike the involvement of Red Bull GmbH in football which exists for commercial reasons, providing better living conditions to its employees in the early 20th century was the main objective.