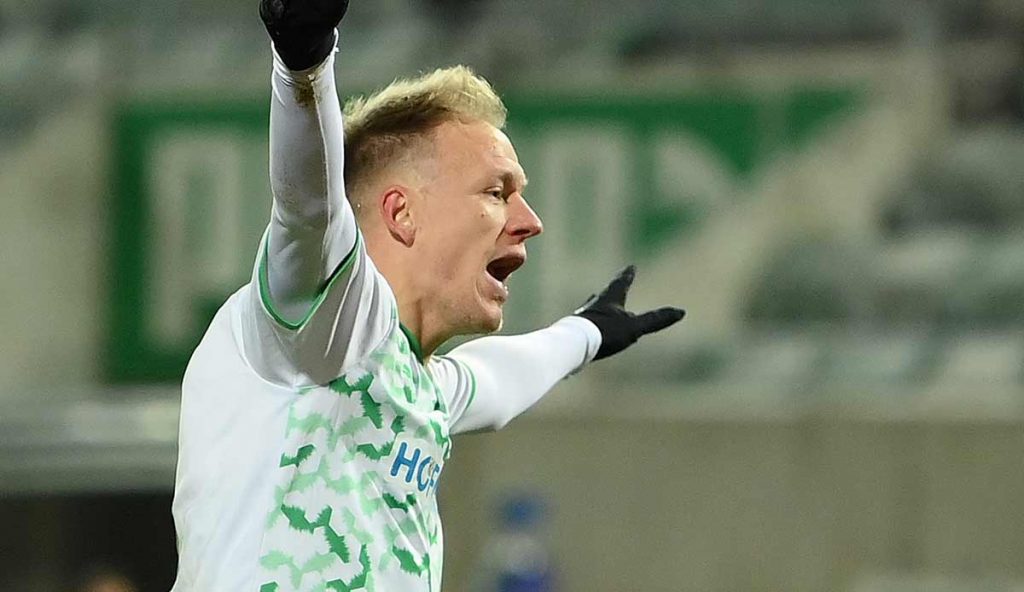 Spielvereinigung Greuther Fürth is a German professional football club belonging to the city of Fürth in the northern parts of Bavaria.

It played the recently concluded 2021/22 season in 1.Bundesliga, the highest football league in Germany. The club has 3 national championships and has hosted its home-games at Sportpark Ronhof since 1910.

Greuther Fürth features a shamrock on the club crest and usually plays in a green and white strip. Both the emblem and colours allude to the city-flag and coat of arms. It has an intense century-old rivalry with fellow Bavarian club 1.FC Nürnberg since the two sides directly competed for the top honours in the early decades of the 20th century.

SpVgg Greuther Fürth traces its roots back to the formation of a football department within the gymnastics club Turnverein 1860 Fürth on 23rd September 1903. After not getting enough support from TV Fürth, the football players left the organisation in November 1906 to form its own club.

SpVgg Fürth began in Ost Kreisliga, the top-division for Bavaria at the time, taking home the league-title on 3 occasions in 1911/12, 1912/13 and 1913/14. In the latter season Fürth also won its maiden German championship, beating VfB Leipzig by a golden-goal after a 154-minute stalemate.

In 1920, Greuther Fürth reached the German championship final once again losing 2-0 to 1.FC Nürnberg, the dominant team of the era. The rivalry was very intense and when in 1924, the German national team was once made up exclusively from the two clubs, both sets of players slept in separate coaches.

Moreover, the club also reached the final of the Süddeutscher Pokal on 5 occasions in this period, taking the title 4 times: 1923, 1925, 1926 and 1927. In the 1930/31 season, Fürth took the Bezirksliga Nordbayern title once again and then went on to lift the South German championship.

With the arrival of the Third Reich in 1933, the top-flight of German league-football was split into the 16 regional divisions called the Gauligen. SpVgg Fürth was now part of Gauliga Bayern, winning the title in 1934/35 and remaining a competitive side until its conclusion while arch-rivals Nürnberg won the division 7 times during this period.

Following the end of World War II, Fürth was admitted to the Oberliga Süd in the 1st division for its inaugural 1945/46 campaign. After ending the initial couple of seasons in mid-table, it finished the 1947/48 season in 15th position and was relegated down to the 2nd tier.

SpVgg Fürth began 1948/49 in the amateur Landesliga Bayern and ended it in 2nd place to gain an immediate promotion to the top-flight. Upon its return to Oberliga Süd, the club then went to clinch the league-title in 1949/50 although it could not reach the final of the German championship.

Fürth remained in the upper third of Oberliga Süd in the early 1950s but gradually slipped down into mid-table as the years progressed. The club did manage a couple of top-6 finishes in this period but it also had to battle hard to avoid relegation on a few other occasions.

Relegation to the 2nd Tier

The DFB announced the start of a novel nationwide league featuring only the top teams of Germany to serve as its new 1st division at the end of the 1963/64 season. While Fürth had remained in Oberliga Süd for more than a decade, it was not able to match the qualification criteria and was therefore dropped down into the 2nd division.

SpVgg Fürth started the 1963/64 campaign in Regionalliga, introduced as part of the new 2nd division and finished on 9th spot in a 20-team league. It remained a top-half side in Regionalliga Süd with its best performance coming in the 1966/67 season when it narrowly missed out on promotion after finishing in 3rd place.

Over the next few years, Fürth steadily crept up the league standings and finished the 1978/79 campaign in 4th position in 2.Bundesliga Süd. The performances dropped off at the turn of the decade although it managed to survive the mass relegation when the 2.Bundesliga was trimmed down to a single division at the end of 1981/82.

At the end of the 1983/84 season SpVgg Fürth finished on 16th spot in the 2.Bundesliga and was relegated to the 3rd division. In 1984/85, it featured at the amateur level in the Bayernliga under the Oberligen structure. In 1987/88, the club was then further relegated into the 4th tier.

For 1988/89, Fürth featured in Landesliga Bayern-Mitte and finished the season as runners-up but could earn its promotion. In 1990/91 the club won the division-title and went back to the 3rd division after a 3 year absence. The club returned to Bayernliga for 1991/92 and shifted into Regionalliga when it was reintroduced as the new 3rd tier.

SpVgg Fürth featured in Regionalliga Süd for the 1994/95 season to earn a 3rd place finish. After ending the next season in the mid-table with the club in severe financial problems, it joined together with TSV Vestenbergsgreuth, changing its name to SpVgg Greuther Fürth by which it is known today.

For the following 1996/97 season, players from TSV Vestenbergsgreuth into SpVgg Greuther Fürth, especially as both clubs were playing at nearly the same level. The club finished the campaign as runners-up of Regionalliga Süd, thereby earning a direct promotion to 2.Bundesliga.

During this period the club’s long-serving home-stadium, Sportpark Ronhof was also handed a major overhaul since the construction of the main stand in 1950. With new stands on 3 sides of the pitch including a roofed seating gallery as well as installation of floodlights for the first time.

Having a modernised stadium helped the club to stabilise financially as it gradually re-established itself in the 2nd division. Throughout the opening decade of the 20th century, Greuther Fürth regularly finished inside the top-half of the 2.Bundesliga table although it could not manage to gain promotion.

Greuther Fürth came closest to earning a promotion to the top-tier in 2010/11 after ending the season in 4th place in 2.Bundesliga. In the subsequent 2011/12 campaign, it beat Eintracht Frankfurt by 2 points to win its first 2.Bundesliga title and thus securing a place in the top-flight after half a century.

In 2012/13, SpVgg Greuther appeared in its maiden 1.Bundesliga season which soon turned out to be a very short stay. It was completely outclassed in the top-division and eventually ended down at the bottom of the standings in 18th position and winning just 4 matches in the process.

Back in 2.Bundesliga for 2013/14, Greuther Fürth finished the season in 3rd place to take the playoff berth to earn a shot at an instant passage back onto the top-flight. But it could not grab the opportunity and went down on away-goals to Hamburger SV with the tie ending at 1-1 after two legs.

Fürth remained in the 2nd division until the close of the decade and had even come perilously close to finishing inside the bottom-3 on a couple of occasions. However, it made a massive improvement during the 2020/21 campaign and finished as runners-up in 2.Bundesliga to earn a direct entry up to the top-tier.

SpVgg Greuther Fürth appeared in 1.Bundesliga for only the 2nd time in 2021/22 and its stay was just as short and inferior as the first. It languished in the drop-zone with only 1 league-win in the opening-half of the season. The latter half was scarcely any better and it ended down in 18th place with a 15-point margin to safety.