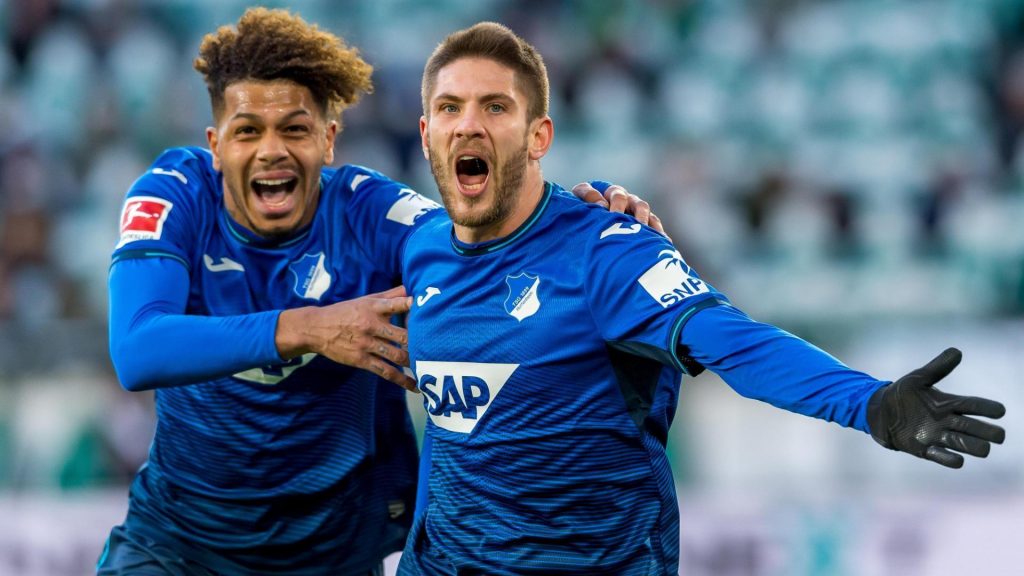 Turn- und Sportgemeinschaft 1899 Hoffenheim e.V. is a professional German football club based in the village of Hoffenheim belonging to the municipality of Sinsheim in the state of Baden-Württemberg. It currently plays in 1.Bundesliga, the highest football league in Germany.

TSG Hoffenheim was playing in the 5th division at the start of the millennium when software billionaire Dietmar Hopp purchased the club. With his financial backing, it took rapid strides in the German league system and achieved promotion to the top-flight at the end of the 2007/08 season.

Since then Hoffenheim has remained part of the Bundesliga and its best performance in the top-tier is a 3rd place finish in 2017/18. It has also qualified for the UEFA Champions League on 2 occasions. The chief colours of the team are blue and white and it plays its home-games at Rhein-Neckar Stadion.

The origins of TSG Hoffenheim are traced back to Turnverein Hoffenheim, a gymnastics club started in 1899 and Fußballverein Hoffenheim, a football club that began in 1921. The two clubs merged together in 1945 to become its present form while its focus gradually turned solely towards football.

Moving up the Lower Divisions

At the start of the 1990’s Hoffenheim was a local amateur side that competed in the Baden-Württemburg A-Liga in the 8th division. The club made steady improvement in the next few years and had managed to reach the Verbandsliga Nordbaden in the 5th division by 1996.

In 2000, the club was bought by Dietmar Hopp, a former employee at IBM and co-founder of German multinational software company SAP who had spent time at the club as a youth player. Hopp poured in considerable investments into the club which started to produce results almost immediately.

TSG Hoffenheim won the Verbandsliga Nordbaden and gained promotion to the 4th tier for the 2000/01 campaign. The club then clinched the Oberliga Baden-Württemberg in its very first attempt to secure consecutive promotions and moved up to Regionalliga Süd in the 3rd division for the 2001/02 season.

Hoffenheim finished its first season in Regionalliga in 13th position and moved to 5th place in the following campaign. In 2003/04, it made its debut in DFB-Pokal beating 2nd tier outfits SV Eintracht Trier 05 and Karlsruher SC as well as Bundesliga side Bayer 04 Leverkusen before blowing out 2.Bundesliga side VfB Lübeck in the quarter final.

After establishing itself as a mid-table team in Regionalliga Süd for the next couple of years, Hoffenheim finished 2005/06 in 4th place to earn its best league-finish. At this time, the club had unsuccessfully tried to merge itself with FC Astoria Walldorf and SV Sandhausen to form a new club called FC Heidelberg.

Promotion to the Top-Flight

At the end of the 2005/06, the club decided to overhaul its squad and technical staff with personnel that had experience of performing at the top-level. Ralf Rangnick, who had previously served 1.Bundesliga sides like VfB Stuttgart and FC Schalke 04, was roped in as the manager on a 5-year contract.

The club also brought in several players that had played in 1.Bundesliga such as Joechen Seitz and Tomislav Marić along with promising young talents like Sejad Salihović. The investments paid swift dividends as Hoffenheim finished runners-up in Regionalliga Süd to earn promotion to the 2nd tier.

Hoffenheim began the 2007/08 in 2.Bundesliga, its first-ever season in professional football. The team got off to a slow start but gradually picked up form and moved up to 2nd place by Matchday 23. The team held its lines and finished as runner-up to Borussia VfL Mönchengadbach and earned promotion to 1.Bundesliga.

By securing consecutive promotions, TSG Hoffenheim broke into the 1.Bundesliga, leaving more illustrious teams with storied traditions in the lurch. It set a new template for the smaller German clubs in the coming years to emulate its strategy of securing rich corporate investors to rise up through the ranks.

TSG Hoffenheim played its maiden 1.Bundesliga season in 2008/09 and finished the campaign in an impressive 7th position. Its two best players for the season were the strike-pair of Vedad Ibišević and Demba Ba who both scored 18 and 14 league-goals respectively.

The 2009/10 season was less successful and Hoffenheim finished outside the top-half in 11th spot. They finished in the same position the next season while Ralf Rangnick resigned from his post in the middle 2010/11 with Marco Pezzaiuoli taking over the reins until the end of the season.

Holger Stanislawski became the next manager of Hoffenheim but lasted less than 6 months at the job before Markus Babbel was named as his replacement. The former German international guided the team to another 11th place finish and was retained as the head-coach for the upcoming season.

But Hoffenheim made a dreadful start in 2012/13 and Babbel was sacked and replaced by Marco Kurz. But he too was fired in April as the team remained in the drop-zone. Markus Gisdol then came to the club and could only earn 16th place. It took a 5-2 win on aggregate over 1.FC Kaiserslautern in the ensuing playoff to keep its top-flight status.

In 2013/14, Hoffenheim enjoyed a much more pleasant campaign, getting 72 goals to have the 3rd best scoring-record but it also had the weakest defence and ended on 9th spot in the end. Roberto Firmino netted 16 times and added 12 assists to win the Bundesliga Breakthrough Player of the Year.

After taking 8th place in the next season, Hoffenheim had to endure a relegation scrap in 2015/16 with Markus Gisdol getting sacked in late October and being replaced by Huub Stevens. The Dutchman resigned from the job in February and Julian Nagelsmann was promoted from the U19’s squad to take over the first team.

Nagelsmann took charge on a 3-year contract with the club lying in 17th position and so became the youngest-ever manager in Bundesliga history. Hoffenheim eventually cut down a 7 point margin to safety and finished a point above the bottom-3 in 15th spot by winning 7 of its last 14 fixtures.

The 28-year old manager signed Andrej Kramaric, Kerem Demirbay and Sandro Wagner for the 2016/17 season. Despite making a slow start, the team slowly gained form and even scored a memorable 1-0 win over FC Bayern in April before ending the campaign in 4th place.

TSG Hoffenheim qualified for the playoff-round of the UEFA Champions League but lost 3-6 on aggregate to Liverpool FC. This gave the club entry into the UEFA Europa League where it crashed out in the group-stage. It ultimately clinched 3rd spot in the Bundesliga despite finishing 29 points behind champions Bayern München.

The 2018/19 season was a major disappointment however after finishing at the bottom of its group in the UEFA Champions League. The European commitments also hampered the domestic form and it finished the Bundesliga down in 9th position with Nagelsmann leaving the club to join RB Leipzig.

Alfred Schreuder was named as the manager for the 2019/20 season and Hoffenheim took 6th place in the Bundesliga, earning the club qualification in the UEFA Europa League. But the Dutch manager left Hoffenheim by mutual consent after failing to meet expectations of the club.

Sebastian Hoeneß became the manager at the start of the 2020/21 season which ended with the club moving out of the top-half into 11th position. In 2021/22, the club enjoyed better form and was in the hunt for a top-4 spot but a poor finish to the campaign saw the club drop down to 9th position in the end.

In its rapid transformation from a local amateur side into an established Bundesliga club, TSG Hoffenheim has drawn plenty of ire from the fans of various clubs and even in the press. The chief points of criticism are the lack of any strong traditions and a serious local fan base since it belongs to a small village of 3,300 inhabitants.

Comparisons are drawn with the now-defunct Scottish Premier League side FC Gretna, a small club that rapidly moved up through the divisions with the backing from a wealthy financier until it capitulated abruptly. Some have also likened it to other multinational corporate-owned clubs such as Bayer 04 Leverkusen, VfL Wolfsburg and RB Leipzig.

Yet Bayer Leverkusen and Wolfsburg are quite different from Hoffenheim in this regard as both clubs have a fairly long history and were also established by the workers of the respective companies. And Hoffenheim also differs widely from RB Leipzig, which is part of a network of clubs owned by a corporation for purely commercial purposes.