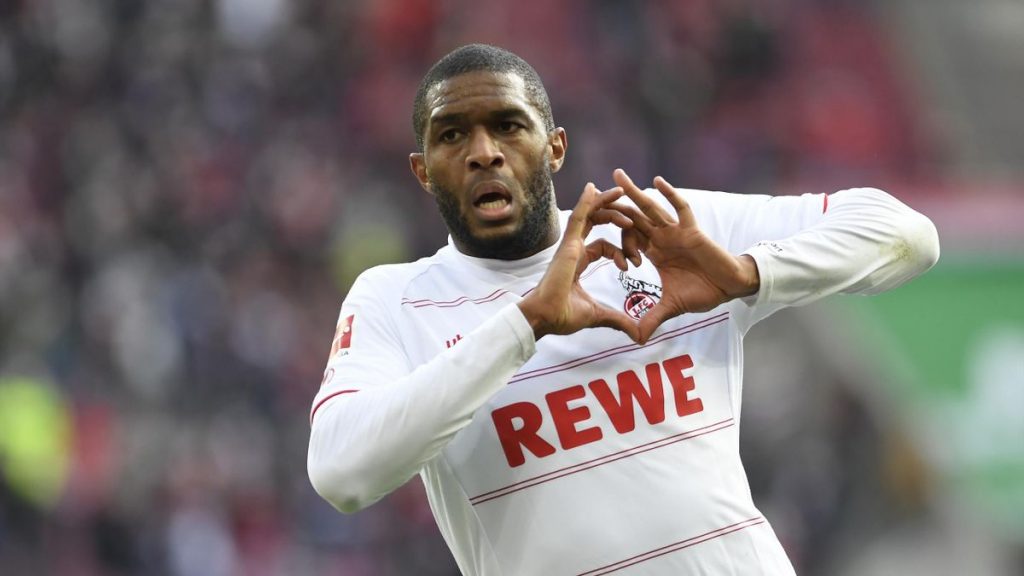 1.Fußball-Club Köln 01/07 e. V., is better known as 1.FC Köln. It is a German professional football club belonging to the city of Cologne in the state of North-Rhine Westphalia.

Like many football clubs in the country, it is part of a larger club with other departments for gymnastics, table tennis and handball. 1.FC Köln presently plays in the Bundesliga, the highest league in the German football structure.

It has been crowned champion of Germany on 3 occasions so far. Köln has over 10,000 members making it the 4th largest club in the country. It plays its home-games at the RheinEnergieStadion.

The club is nicknamed ‘Die Geißböcke’ or The Billy Goats in reference to the club’s mascot, a male goat named after former player and manager Hennes Weisweiler. The traditional colours of Köln are white and red. Its major local rivals are Borussia VfL Mönchengladbach, TuS Fortuna Düsseldorf and Bayer 04 Leverkusen.

The origins of 1.FC Köln lies with two separate sports clubs that began in Cologne at the turn of the 20th century. The club only reached its present form following a merger between the two clubs, Kölner Ballspiel-Club 1901 and Spielvereinigung 1907 Köln-Sülz a few decades later.

Kölner BC was formed by a group of young men on 6th June 1901 who left gymnastics club FC Borussia Köln since they were more interested in football. It became a competitive side in the years before World War I and clinched the Westdeutsche championship in 1911/12 and reached the preliminary rounds of the German championship.

On 1st January 1919, Sülzer Sportverein joined together with Fußball Club 1908 Hertha Sülz, thereby becoming SpVgg 1907 Köln-Sülz. In the next 10 years, it enjoyed plenty of success and picked up the Westdeutsche title in 1927/28 but lost in the early rounds of the national championship on its turn.

After the Nazi Party established the Third Reich, the football structure was changed into the Gauligen system containing 16 regional leagues in the top-tier. SpVgg Köln-Sülz was part of Gauliga Mittelrhein and won the title in 1938/39. But the club faltered after that even as the country collapsed following World War II.

In 1948, Kölner BC and SpVgg Sülz 07 merged into one club becoming 1.FC Köln. It began play in Oberliga West at the top-division during the 1949/50 season. The club won the league-title in 1953/54 and also reached its maiden DFB-Pokal final, losing 0-1 to VfB Stuttgart.

Köln bagged its 2nd Oberliga West crown in 1959/60 and progressed into the final of the national championship where it was beaten 2-3 by Hamburger SV. The club won the division-title again in 1961/62 and this time earned a 4-0 victory over 1.FC Nürnberg to win the German championship for the time.

It also qualified the club into the European cup for the first time in the 1962/63 season where it was soundly beaten by Dundee FC. Nevertheless, the club clinched the Oberliga West once again in its final run as the top-flight but lost the West German championship final to Westphalia rivals BVB 09 Borussia Dortmund.

For the 1963/64 campaign, the German league structure was overhauled into a single nationwide league as the top-division. As the reigning champions in the last season of Oberliga West, 1.FC Köln was one of the 16 founding members of the Bundesliga before going on to become its champions for the inaugural season.

FC Köln finished 1964/65 as runners-up in the Bundesliga to SV Werder Bremen. It became the first team in the league to field a Brazilian player after signing Zézé even though it was a short stay at the club. Köln lost in the quarter-final of the European Cup to Liverpool on a coin-toss after 3 consecutive drawn games.

Over the next 3 years, Köln remained a top-half side without really challenging for the Bundesliga title. It entered the final of the DFB-Pokal in 1967/68 and defeated VfL Bochum 4-1 to lift the trophy for a 2nd time. The club would go on to the cup-final on 3 more occasions in the next 4 seasons.

Köln finished the 1969/70 Bundesliga campaign in 4th position and lost 1-2 to Kickers Offenbach in the DFB-Pokal final. In the following 1970/71 season, the club dropped out from the top-half of the Bundesliga but reached the DFB-Pokal final yet again where it was beaten 2-1 in extra-time by FC Bayern München.

In 1972/73, Köln finished the Bundesliga in 2nd place and appeared in the DFB-Pokal final once more and again lost 2-1 in extra-time, this time to Borussia VfL M’gladbach. Köln finished inside the top-5 of the Bundesliga for the next 4 seasons but was unable to launch a serious shot at the title.

The 1976/77 season saw Köln reach the DFB-Pokal final one more time, its 4th showing in the championship-game over the last 7 years. Its opponents on this occasion was Hertha BSC and Köln was able to secure a 2-1 victory on aggregate in a two-legged tie to lift the trophy for the 2nd time in its history.

1.FC Köln enjoyed its most glorious campaign in 1977/78 when it defended the DFB-Pokal title with a 2-0 victory against neighbouring rivals Fortuna Düsseldorf. It then tipped another Westphalia rival Borussia M’gladbach to clinch the Bundesliga title on goal-difference and became only the 3rd German club to complete the double.

Köln lost both the titles in the following season but was able to get to the final of the DFB-Pokal in 1979/80 but went down 2-1 to Fortuna Düsseldorf, who defended its title after reaching 3 consecutive finals. The club reached the final again in 1982/83 and beat city-rivals SC Fortuna Köln 1-0 to win the DFB-Pokal for the 4th time.

1.FC Köln started the 1990’s in the higher echelons of the Bundesliga but it gradually dropped further away from the leading pack. By the middle of the decade, it had become a mid-table side in the bottom-half of the table. Finally it ended the 1997/98 campaign on 17th position and was relegated into the 2nd tier.

While it could not gain an immediate promotion, Köln was able to win the 2.Bundesliga title in 1999/2000 and return to the top-flight after a two-year absence. After surviving the initial season following its return to 1.Bundesliga, Köln was sent back down to the 2nd division after ending the 2001/02 season in 17th spot.

FC Köln returned to the top-tier on its first opportunity having finished as runners-up in 2.Bundesliga for 2002/03. Its stay lasted only a single season however, after the club was rock-bottom in 1.Bundesliga at the end of the 2004/05 campaign. But Köln again sealed an immediate promotion by winning 2.Bundesliga in 2005/06.

Yet, its return lasted for just a single season once again after ending the 2006/07 season at the very bottom of the 1.Bundesliga table. In 2007/08, Köln finished outside the top-half of 2.Bundesliga but improved substantially to secure another return to the top-tier by ending the 2008/09 season in 3rd position.

Köln was able to keep its top-flight status for the next 3 years until it was relegated from 1.Bundesliga for the 5th time after ending the 2011/12 campaign in 17th place. Following a failed first attempt, Köln was able to get back up to the 1st division by winning its 3rd 2.Bundesliga title in 2013/14.

After managing to avoid relegation on its return to the top-flight, Köln moved up to the top-half in 2015/16, to claim its 1.Bundesliga finish in over a decade. The Billy Goats further improved this mark by taking 5th place at the end of the 2016/17 season to qualify for the UEFA Europa League.

However, 2017/18 proved to be utterly disastrous after Köln made a dreadful start to the season. It was knocked out in the group-stages of UEFA Europa League and changed several managers before ending 1.Bundesliga in 18th position in spite of a stronger finish to the campaign.

Nevertheless, Köln secured its return to the top-tier after winning the 2.Bundesliga in 2018/19. It has remained in 1.Bundesliga since then but was dragged into a relegation-fight after finishing the 2020/21 season in 16th spot. A 6-2 victory on aggregate over Kieler SV Holstein in the relegation-playoff helped avoid the drop.

In stark contrast, the recently concluded 2021/22 campaign turned out to be a far more pleasant one under its new manager Steffen Baumgart. After challenging hard for a top-6 finish, Köln had to settle for a well-deserved 7th place which will allow the club to feature in the UEFA Conference League next season.

Use a welcome offer on EagleBet – such as Sportaza – and use our Bundesliga betting predictions to bet bold on the 1. Bundesliga.