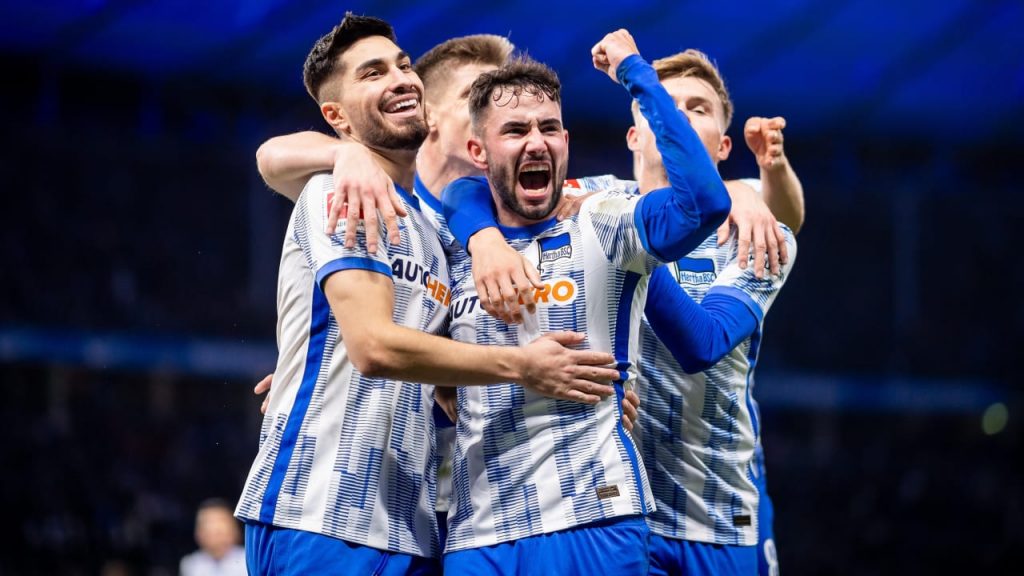 Hertha, Berliner Sport-Club e. V. is a German football club from the Westend locality of Charlottenburg-Wilmersdorf borough in the capital city of Berlin.

The club is generally known as Hertha BSC and it currently plays in 1.Bundesliga, the highest football league in the country. Following its formation in 1892, Hertha Berlin was one of the founding members of the DFB, the German football Association at Leipzig in 1900.

So far, the club has picked up 2 German championship titles in its history. It is nicknamed Die Alte Dame, meaning The Old Lady and has played its home-games at Olympiastadion since 1963.

The club was started in 1892 as BFC Hertha 92 by four young men, one of whom had travelled on a steamship by the same name with a blue and white smokestack and they remain the colours of the club to this day. The name Hertha is a variation of Nerthus, the goddess of fertility in Germanic mythology.

Hertha began strongly on the field and reached its first Berlin championship final in 1904/05. In 1910 it earned an important win at the time despite being a friendly match after defeating Southend United, a team from England where the game originated and whose clubs ruled the sport in this period.

But financially Hertha was struggling and the working-class club joined in with more affluent neighbours Berliner Sport-Club in 1920 to take on its present name. The new club went on to dominate Oberliga Berlin-Brandenburg in the 1920’s but failed to make its mark in the national championship.

In 1929/30, Hertha won the Oberliga title for the 6th time before clinching the German championship with a 5-4 victory over KSV Holstein in the final. It repeated the feat again in 1930/31, beating TSV 1860 München 3-2 to win the national championship. The club lost both titles before regaining the Oberliga in 1932/33.

By this time the Third Reich took control of the country and it completely changed the football landscape in the country. Under its Gauligen system consisting of 16 regional top-divisions, Hertha participated in Gauliga Berlin-Brandenburg and won the division on 4 occasions including its final season in 1943/44.

After the end of World War II with the city under Allied occupation, the club changed its name to SG Gesundbrunnen and appeared in the Oberliga Berlin Groupe C for 1945/46. The league was trimmed down to a single division of 12 in the subsequent season and Hertha found itself outside the top-tier.

For 1946/47, Hertha Berlin competed at Amateurliga Berlin in the 2nd division. At the end of the 1948/49 season, it won the league and secured its path back up to the top-flight. The club had also reclaimed its former identity as Hertha BSC before returning to the Oberliga Berlin in 1949/50.

After finishing in the bottom-3 in its first season back at the 1st division, Hertha grew into a top-half side before suffering relegation in 1952/53. The club returned to the top-tier after a year’s absence and went to win the Oberliga Berlin in 1956/57 but failed to win a single point in the national championship.

Hertha took the division-title once again in 1960/61 but it again finished at the bottom of its group in the German championship. After finishing as runners-up in the following season, it regained the Oberliga Berlin in 1962/63 but disappointed in the national championship once more.

For the 1963/64 season, the top flight of German football was consolidated into a single nationwide league for the first time. Being the reigning champions of Oberliga Berlin, Hertha was a founding member of the new Bundesliga. But it barely escaped the drop in the inaugural campaign, finishing in 14th spot.

After the end of the 1964/54 season, Hertha was the only club to be demoted from the Bundesliga despite ending outside the relegation-zone. The club was found to be guilty of attempting bribes on players to play in the city which had gained some notoriety after creation of the Berlin wall.

Therefore, Hertha was back in the 2nd division and won the Regionalliga Berlin in 1965/66 and 1966/67 seasons but was knocked out in the promotion playoffs on both occasions. It took the division-title again in 1967/68 and on the third time it was able to seal its revisit to the top-flight.

After staying alive on its return to the top-division, Hertha finished 1969/70 on 3rd spot. It repeated this in the next season but was then mired in the Bundesliga match-fixing scandal of 1971with several other teams. This also revealed the club to be in huge debt which was paid off by selling the Stadion am Gesundbrunnen, its former home-ground.

Nevertheless, Hertha remained a competitive team through the 1970s, finishing in the top-half of the Bundesliga for most of the decade. It enjoyed its best league performance in 1974/75, ending as the runners-up to Borussia VfL Mönchengladbach, a feat that has not been matched by the club ever since.

Hertha Berlin entered its maiden final of the DFB-Pokal in 1976/77 where it lost 0-1 to 1.FC Köln. It did so again in 1978/79 and stumbled in the final by the same score-line, this time to TuS Fortuna Düsseldorf in extra-time. In that very season Hertha reached the semi-final of the UEFA Cup as well, which is still its best showing in Europe.

By the end of the decade, its time in the sun gradually came to an end and it finished the 1979/80 campaign in 16th position to get relegated into 2.Bundesliga. After spending two years in the 2nd division, the club returned to the Bundesliga in 1982/83 before getting immediately dropped back to the 2nd tier.

Having finished in the bottom-half of 2.Bundesliga in the two seasons following its relegation, Hertha Berlin ended 1985/86 in 17th position to get dropped down into the 3rd division. It won the Amateur-Oberliga Berlin in both of its two campaigns and gained promotion to the 2nd division at the end of 1987/88.

Despite ending its return to 2.Bundesliga in the bottom-half, Hertha surprisingly went to claim the title in the subsequent 1989/90 campaign to return to the top-division once more. Yet its stay only lasted a single season and it was back in the 2nd tier after taking last position in the Bundesliga standings.

In the meantime, the Berlin Wall was torn down and the club could now reach out to the supporters in the eastern parts of the city. Hertha was mostly a top-half side in the 2.Bundesliga during the early 1990’s while its reserve amateur side reached the final of the 1992 DFB-Pokal, narrowly losing 0-1 to Bayer 04 Leverkusen.

But the club was running into mounting debts by this time and had to sell off its real-estate holdings and sign sponsorship agreements to stay afloat. It eventually paid the dividends after Hertha sealed its return back to the top-tier after finishing the 1996/97 2.Bundesliga season in 3rd place.

After managing to survive its return to the Bundesliga, Hertha Berlin caused another surprise by taking 3rd position in 1998/99, earning its first qualification into the UEFA Champions League. It was eliminated in the 2nd group-stage of the competition before it ended the 1999/2000 league campaign in 6th position.

In the opening decade of the 21st century, Hertha Berlin finished inside the top-6 of the Bundesliga on a consistent basis. Its best performances in this period were a trio of 4th place finishes in 2001/02, 2004/05 and 2008/09. But in the 2009/10 season, the team dropped off remarkably and was relegated after ending down in 18th place.

Hertha did secure an instant passage back to the top-flight after taking the 2.Bundesliga title in 2010/11. But the club only managed 16th position in the Bundesliga in 2011/12 and subsequently lost 3-4 on aggregate to TuS Fortuna Düsseldorf in the relegation-playoff to go back down into the 2nd division yet again.

By winning the 2.Bundesliga crown in 2012/13, Hertha Berlin managed to get back to the top-flight immediately. After keeping its 1.Bundesliga status for the following two seasons, the club finished 2015/16 in 7th position, earning a spot in the UEFA Europa League and making its return in Europe.

In 2016/17, Hertha Berlin moved up to 6th place and achieved its best league-finish of the past decade. Over the course of the next 5 seasons, the club has regressed steadily and ended outside the top-half of the Bundesliga on each occasion but has been able to avoid the drop up till now.

It ended just a couple of points outside the relegation-zone in 2020/21 but finished the recently concluded 2021/22 campaign in 16th position after a dreadful 2nd half to the season. Hertha remains a 1.Bundesliga team for the upcoming season nonetheless, after beating Hamburger SV 2-1 on aggregate in the relegation-playoff.

Use a welcome offer on EagleBet – such as Sportaza – and use our Bundesliga betting predictions to bet bold on the 1. Bundesliga.