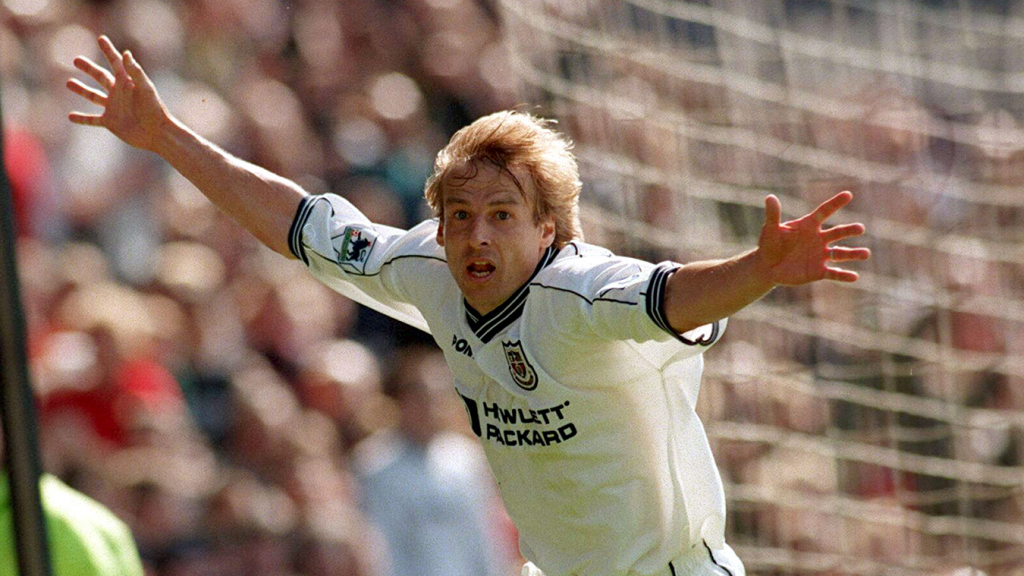 Rüdiger – who admits he has been given “new life” by Tuchel – has a great rapport with Chelsea fans, although as contract negotiations drag on, Liverpool, Manchester City, Tottenham, Real Madrid, Atletico Madrid, Juventus and Bayern Munich are all reported to be circling.

But there have been many Bundesliga stars before him who were even more charismatic and loved by English supporters.

There have, without doubt, been some German superstars who lit up the world’s most famous league.

At least 69 Germans have graced the Premier League since Matthias Breitkreutz came on as substitute for Aston Villa against Man City just under 30 years ago.

Uwe Rosler became the 1st German player to score in the Premiership in 1994.
Robert Huth boasts the most appearances (322).

But it was the arrival of Bundesliga and Germany star Jurgen Klinsmann who got Premier League crowds off their feet, when they saw for the first time his celebratory dive after scoring a goal. It came in Spurs’ 4-3 win at Sheffield Wed.

Klinsmann is by some distance the most iconic German to play in the Premier League, but if you measure talent by assists and goals – fair metrics after all – then Mesut Ozil stamping his authority on the Premiership for Arsenal from 2013 must be regarded as one of the great German imports, contributing 54 assists – and he even scored four more goals than both Klinsmann and Rosler.

Ozil was not the first brilliant German midfield player who had starred in the Bundesliga before coming to the Premier League. Liverpool’s Dietmar Hammann was a key member of their midfield for years, while Michael Ballack was arguably a bigger star when he arrived from Chelsea – though in EagleBet’s view his four years at Chelsea were after his best period.

There have been two massive Bundesliga stars since those great played in the Premier League, and both featured under Pep Guardiola with Manchester City.

Leroy Sane joined for €50m in 2016 and was the first German to win the Young Professional Footballers Association player of the year. The German international, now back in the Bundesliga with Champions Bayern Munich, was a key player in City’s 2017/18 and 2018/19 title winning teams, scoring 25 goals with 28 assists.

Illkay Gundogan has also been a key figure in City’s dominance. In March 2021 he was named Premier League Player of the Month two months running and was City’s leading goal scorer that season.
We should not ignore goalkeepers. Jens Lehmann was one of Arsenal’s “Invincibles” in 2003/4, playing every game, keeping 15 clean sheets.

He was an incredible ambassador for Germany in his all too brief Premiership career, becoming one of the most popular Premier League players of all time thanks not only to his brilliant goals, but his goal celebrations, constant smile and polite, intelligent conduct off the pitch.

Tell us your top three German players of all time in the Premier League and why – the best email will win a shirt of the club of your choice with the name of your choice on the back.
Email EagleBet

Remember to sign up to our newsletter and claim a welcome bonus from one of our partner operators to bet on the Premier League and Bundesliga. Join the EagleBet family and receive the best Bundesliga betting tips and predictions.