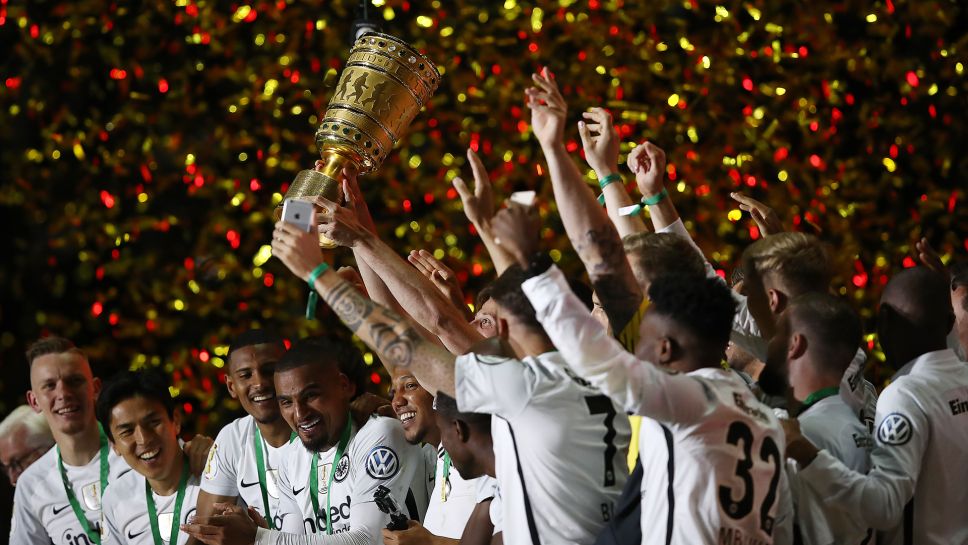 The DFB-Pokal is a great and much loved German knock-out cup competition, famous for its giant killings. It is contested by 64 teams, including sides from the Bundesliga and 2.Bundesliga, so all the great clubs are fighting for DFB-Pokal glory including Bayern Munich and Borussia Dortmund and other Bundesliga giants. EagleBet has a great record with its Bundesliga betting tips and as we prepare for the DFB-Pokal quarter finals in the New Year, the Eagle will be there with its pro tips and predictions for the DFB-Pokal

Background to the DFB-Pokal

This season’s DFB-Pokal kicked off on 6 August 2021. There are six knock-out rounds, culminating (Covid allowing) on 21 May 2022. The final will be at Berlin’s Olympiastadion, a “neutral” venue and host to this great cup competition since 1985.

In German domestic football, only the Bundesliga itself is considered more important, though top German Bundesliga teams probably covet the Champions League more these days than the DFB-Pokal – as with another historic cup competition, the FA Cup in England.
The German Football Association (DFB) runs the DFB-Pokal.

Last year’s DFB-Pokal was won in style by Borussia Dortmund, who thrashed RB Leipzig 4-1. It was the 5th such title for Dortmund.
Predictably Bayern Munich have won the trophy a record number of times: 20. Fortuna Dusseldorf hold the record for most consecutive DFB-Pokal wins: 18, which stretched from 1978 to 1981.

Winning the DFB-Pokal is not only a big honour for Bundesliga clubs, it also clinches qualification to the UEFA Europa League 2022/3 group stages.

Victory in this celebrated German cup competition also enables the winner to host the DFL-Supercup to kick off next season, against the Bundesliga Champions (so normally Bayern Munich!). There are three further places reserved for the regions with the most (men’s) teams – Westphalia, Lower Saxony and Bavaria.

The DFB-Pokal, then, is a very democratic and inclusive cup competition as any team is allowed to enter local tournaments which ultimately qualifies you for the association cup. The only “ban” is for reserve teams, since 2008.

It began life in 1935 as the Tschammer-Pokal until it had to stop in 1943 due to the war. The first winners were 1. FC Nürnberg, the giant of its day though now in 2.Bundesliga, followed by Schalke 04.

Due to its association with the Nazis, the cup was disbanded but revived again in the new West Germany as the DFB-Pokal in 1952/3 – though the East Germans had been quicker to revive the tournament as the FDGB-Pokal from 1949 to 1991, when it merged with DFB-Pokal.

The DFB-Pokal is often known as the “mother of all cup sensations” (Die Mutter aller Pokalsensationen) because like all great cup competitions it is famous for its shocks.

It can make it tricky to write betting tips for the DFB-Pokal, but it also makes it huge fun to follow – and if you do get a DFB-Pokal betting prediction right about a giant killing, you can make, well, a killing on your bet! So make sure to look out for our DFB-Pokal betting guides through the 2021/2 season.

Remember in German football – unlike the English football league – only the Bundesliga and 2.Bundesliga were fully professional until 2008. That meant that the then largely amateur clubs of 3.Liga would regularly pull surprises on their professional rivals.

The first mega-shock was probably Hamburger SV losing in 1974’s second round to little VfB Eppingen of the third tier.

In 1990, a 4th tier club knocked out a Bundesliga side for the first time when SpVgg Fürth beat giants Borussia Dortmund: one of the great DFB-Pokal giant killings.

Other great shocks – imagine the betting odds! – include the triumph of the reserve side of Hertha BSC – becoming the first third division and first reserve side to reach the DFB-Pokal final in 1993.

The shocks continued. In 1997 both Borussia Dortmund and Schalke 04, then two of the kings of Europe, were knocked out of the BDF-Pokal by Eintracht Trier – an incredible achievement.

Just three years later FC Magdeburg became the first team from the 4th division to send two Bundesliga giants out of the cup in the same season.

Perhaps the smallest club to win the BDF-Pokal was 2. Bundesliga Kickers Offenbach in 1970 – though technically they had been promoted just before the final to the Bundesliga.

So the DFB-Pokal started earlier this season with 64 clubs. The majority of the places go to the clubs of the Bundesliga and 2.Bundesliga, joined by the top four teams of the 3.Liga.

That leaves 21 places for the first round of the DFB-Pokal, and these clubs are cup winners of regional football associations, known as the Verbandspokal.

Coming next will be our DFB-Pokal betting guide which will give you the DFB-Pokal odds on the winner, including our pro tips and predictions. As explained, it is harder to make predictions – and therefore produce a betting guide – for the DFB-Pokal than it is for the Bundesliga but there are some truly great bets at great odds if you can get it right.

We have great welcome offers on EagleBet with our expert punters wagering some serious sums. Claim a bonus from an operator listed here and bet after studying our DFB-Pokal betting guide. Sign up to our free newsletters and use our pro tips and predictions to bet at the best odds on the Bundesliga, DFB-Pokal, Premier League, FA Cup, EFL and other top leagues and competitions.